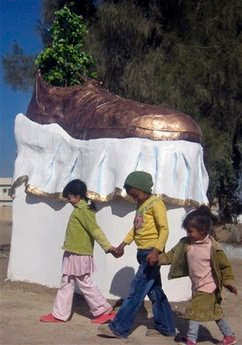 BAGHDAD – When an Iraqi journalist hurled his shoes at George W. Bush last month at a Baghdad press conference, the attack spawned a flood of Web quips, political satire and street rallies across the Arab world.

Now it's inspired a work of art.

A sofa-sized sculpture — a single copper-coated shoe on a stand carved to resemble flowing cloth — was formally unveiled to the public Thursday in the hometown of the late Iraqi ruler Saddam Hussein.

Officials and visitors walked around the outdoor sculpture during the brief ceremony, pondering on its eccentricities — such as a tree poking up from the shoe's interior.

Its sculptor called it a fitting tribute to the shoe hurler, Iraqi journalist Muntadhar al-Zeidi, and his folk hero reputation in parts of the Muslim world and beyond.

The Baghdad-based artist, Laith al-Amari, said the work honors al-Zeidi and "is a source of pride for all Iraqis."

He added: "It's not a political work."

It was taken down a day after it was erected hahahah

Salaheddin's deputy governor, Abdullah Jabara, told DPA: "Children should be put away from any political-related issues. Since this is an orphanage, this monument can instil in children's heart things for which the time is not now."

Thank the Gods for sanity.

If you have nothing better to say just shuddd up!

What has rocky done to you?

I would also like to throw my shoes at Anwar and Haris Ibrahim.

What a shame it was taken down a day later.

Zahar!Freedom of speech mind you.
He murdered my sister!

If the Iraqis act anything like Americans, then they'll re-create another shoe, twice the size, after U.S. forces vacate the country

Throwing shoes is now the new trend! After Bush, now it's Chinese Premier Wu who gets a shoe thrown at him, in of all places - the revered grounds of Cambridge University. Hence my blog poll - who would you throw your shoes at? Problem though, I wouldn't waste my time throwing my Manolos at any of these guys. Although Madoff would be a favourite seeing how he still lives in a fancy house with billions probably in an off-shore somewhere, whilst millions have lost their life savings. How did we get to this point?