When can we make this happen here? Plastic-free aisles in supermarkets

There is no logic in wrapping perishable food in indestructible plastic, say campaigners hailing today’s launch in Amsterdam 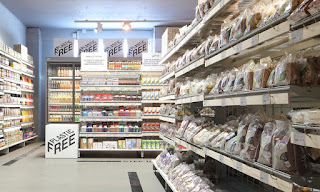 Today the world’s first plastic-free aisle was launched in Amsterdam by environmental campaign group A Plastic Planet and Dutch supermarket Ekoplaza. The aisle enables shoppers to choose from 700 everyday products that are free from plastic packaging. Before the end of the year, Ekoplaza plans to roll the plastic-free aisle out across each of its 74 stores.

Plastic packaging has no place in food and drink.
There is no logical basis for wrapping something as perishable as food with something as indestructible as plastic.
With recycled plastics today accounting for just 6% of total plastics demand in Europe, it’s clear that we cannot recycle our way out of the plastic problem.
Food and drink plastic packaging does not belong in a circular economy given that it is difficult to reclaim, is easily contaminated, and all too often proves valueless.
The grocery retail sector accounts for more than 40% of all plastic packaging.
Plastic-free aisles make sound commercial sense, with a Populus poll last year revealing that 91% of Britons back the measure.
Plastic has replaced so many forms of packaging that consumers wanting to reduce their plastic footprint at the moment find it impossible to do so.
We agree with A Plastic Planet that a plastic-free aisle will help consumers to reduce their own single-use plastic mountain.
We call on supermarkets across Europe to follow Ekoplaza’s example without delay. - The Guardian
Posted by NURAINA A SAMAD at 3:15 PM No comments:

We won't cry for you, America

Because we're so tired.

This letter below was written by a Canadian.

I am tired of watching killing after killing then seeing gun wagging, egotistical Americans yell obnoxiously about how the cure for this problem is more guns.

And so I can't think about or pray for you anymore. All those thoughts and prayers for the 273rd time this year. Because that's how many shootings America has had since January 1, 2017. I can't waste my prayers on a society that refuses to change. I cannot feel bad for a place that refuses to acknowledge its self destruction.

You fill yourselves with hate that is fueled by fear and misunderstanding of anybody who isn't you. You support banning people from your country. You cheer for a wall to separate you. You refuse to see that the real problem, the real villain, is you.

My family just returned from a trip to the U.S. My daughter loved the warmth and the beaches. She asked me why we couldn't live there. As we drove by billboard after billboard advertising where one could purchase themselves a new gun, and as I listened to racial slurs be used in every day conversation by locals, and as I listened to your President refer to white supremacists as "very good people" and football, players kneeling for your anthem as "sons of bitches", I struggled to find the words to explain to my six year old that we will never live there because I would never want my children to think that any of these things are acceptable, let alone normal.

America's obsession with guns is so fascinating to me, because never in my 31 years has it ever occurred to me to purchase one. But what we need is more guns. Because if we all have guns, we can shoot the shooter.

When does it stop? when does it sink in? People with guns kill people. In the 273 mass shootings that have occurred in 2017, exactly how many were stopped by a person on the street with a license to carry a weapon? You and your handgun are no match for an automatic rifle on the 32nd floor of a hotel. The answer is to control the sale of firearms. Why is it that everyone can see this but you?
People who cannot purchase guns do not massacre schools. People who cannot purchase guns do not mow down six and seven-year old children and their teachers in a time frame of about fifteen minuets. People who cannot purchase guns do not murder fifty-eight people and injure 515. The rest of the world is screaming this at you and you refuse to see the problem because you refuse to take responsibility.

Why is it that you are more concerned about your "right to bear arms" than you are about the mother whose children never come home? I'm sorry America, but I can't pray for you anymore. I am exhausted and you are not changing. And according to history, you never will change. And it will get worse and worse. And our prayers do nothing.

This article (The Economist) is the second of a two-part series on women billionaires and philanthropy, focusing on Asia.

Over half of the world's self-made women billionaires come from Asia-Pacific. And their slice of the pie is increasing

Women make up only a small percentage of top philanthropists in Asia, but their influence is disproportionately large as they transform the nature of philanthropy itself.

In terms of sheer numbers, female philanthropists in Asia lag behind their male peers. Out of the 40 donors listed on the Forbes Heroes of Philanthropy list in 2017, only six are women.

1 On this year’s Hurun index of China’s top 100 philanthropists just 16 are women, compared with an average of 24% in global rankings.


Although few in number, Asia’s female philanthropists are acquiring some prominent additions to their ranks and are marking some new milestones. In May this year Zhonghui You, the founder of Shenzhen Seaskyland Technologies, an educational software company, added her name to the list of the 169 billionaires worldwide who have agreed to give away more than half their fortune to good causes. In doing so, Ms You became the first self-made woman in China to sign the Giving Pledge, an initiative of Bill and Melinda Gates and Warren Buffett.
“I think I can set an example to my peers and hopefully inspire others to pay attention and get involved,” explains Ms You. Her appeal to give more, and to do so publicly, is aimed at the billionaires who have benefited from Asia’s rapid economic growth in the past few decades, particularly in China. More crucially, it is a signal to a particular group to come forward: Asia’s wealthy women.
In March 2017 Forbes released its latest list of the world’s self-made female billionaires. Of the 56 women on the list, 29 come from Asia-Pacific, and of the 15 newcomers to the rankings 13 come from China, Hong Kong, Vietnam or Japan. They also hold an increasing slice of the pie. According to Boston Consulting Group, women held roughly one-third of global private wealth in 2015. It expects this share to rise by 11% a year in Asia-Pacific (excluding Japan), compared with a global average of 7%.
HOMEGROWN PHILANTHROPY
Does this herald a surge in philanthropy in Asia? Women’s wealth is growing alongside Asia’s nascent philanthropic sector. As noted by the Ash Centre for Democratic Governance and Innovation, part of the Kennedy School of Government at Harvard University in Cambridge, Massachusetts, in China alone donations from the top 100 philanthropists more than tripled between 2010 and 2016, from US$1.3bn to US$4.6bn.
Like Ms You, other female role models are starting to emerge. Japan’s Yoshiko Shinohara, who joined the ranks of self-made female billionaires in 2017, established the Yoshiko Shinohara Memorial Foundation in 2014, which grants scholarships to students in nursing and social work programmes. Particularly in China—from where the vast majority of Asia’s self-made women billionaires originates—these home-grown examples are an important milestone, according to Zhenyao Wang, president of the China Global Philanthropy Institute (CGPI), an organisation dedicated to advancing philanthropy in China, which has 50 female members. “[Previously] China learned a lot about philanthropy from the outside world, from the UK, US and Hong Kong,” he says. “But that is changing. Now, as Chinese became wealthier, they look to and respect China’s history of philanthropists.”
One example is Qiaonv He, number 30 on the Forbes list. Worth an estimated US$1.8bn, the founder of Beijing Orient Landscape, a landscape architecture firm, made headlines in 2015 when she donated Rmb2.9bn (US$450m) in corporate stock to her Beijing Qiaonv Foundation for environmental causes. She was the first female philanthropist to donate more than Rmb1bn.
DIVERSE PHILANTHROPIC CHANNELS
The channels these women billionaires are choosing for their philanthropy are diverse. Worth more than US$1bn, Ms You has tried several approaches to giving her money away, including via foundations, one-off gifts, impact investments and supporting social enterprises. While many give to charitable causes, a small percentage have established foundations for their philanthropic pursuits, such as Ms Shinohara and India’s Kiran Mazumdar-Shaw, the founder of Biocon Limited. Just under 30% of Asian women billionaires on the Forbes list have a foundation, compared with more than 80% of American women on the list. “I am inclined to pursue a philanthropic foundation approach in the future,” Ms You adds.


The sector’s underdevelopment means there is significant scope to shape future giving. “These are mostly successful business people, so when they think about philanthropy, they’re also more strategic,” says Yinuo Li, China office director of the Bill & Melinda Gates Foundation. “[They] want to get one-on-one in terms of how to give, how to establish foundations and how to set a strategy for the foundation.”
Mistrust of non-governmental organisations (NGOs)—and too few NGOs to give to—means that many donors are left adopting a do-it-yourself approach. “Lots of foundations end up becoming implementing foundations,” says Ms Li. “They pick an area and hire people to [execute projects], rather than give grants.”
PAVING THE WAY FORWARD
Despite their limited number, these women are making an outsized difference by focusing on changing the nature of philanthropic giving itself. In China, in particular, they are focusing their attention on funding worthy projects in support of government initiatives and nudging policy reforms, thereby facilitating philanthropic activities. 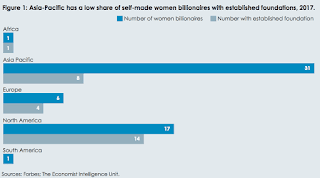 Women “helped change policy and push government reform, by donating in co-operation with the government,” claims Mr Wang of the CGPI. As an example he cites Whitney Duan, founder of the Great Ocean Group, whose Kaifeng Foundation is one of the backers of the East-West Philanthropy Forum designed to convene US and Chinese donors and government representatives to discuss social issues such as climate change, for example.
Moreover, says Mr Wang, female philanthropists are bringing a more constructive tone to funding projects in co-operation with government. “[Women] don’t just criticise,” he says.
Still, more needs to be done to raise awareness of philanthropy, including organising events among female entrepreneurs that promote giving and encouraging more links between women in Asia and other parts of the world to share information and provide mentoring, according to Ms You.
Broader development of the philanthropic industry would help billionaires of both sexes, too, says Ms Li. “Most people are good at doing business, but professionals with experience running foundations are in short supply.”
It is clear that Asia’s self-made billionaires have the development of the industry in their sights, and women will also be at the wheel. For her part, Ms You hopes her advocacy will aid both specific causes and philanthropy in general. “My happiness derives from this personal mission,” she says.
http://sustainablegiving.economist.com/asias-women-billionaires-philanthropy-working-within/?utm_source=Paid+Social&utm_medium=Twitter
Posted by NURAINA A SAMAD at 12:06 PM No comments: