Bapak seemed chirpy Sunday morning. You can tell. His eyes were twinkling, and he wore a cheeky puckered "smile". You know, like there are delightful things on his mind.

He told my step-mum that he would like to meet his old friend Rosihan Anwar (from Jakarta) who was in town.

Now, that was really something.

It is very rare that Bapak asks to take him somewhere, to meet someone.

In the wee hours of Sunday morning -- past midnight to be exact -- we were in Bapak's room after returning from the "Tokoh Wartawan Dunia Melayu" Awards dinner which was held at Armada Hotel in Petaling Jaya.

The awards were presented by the Persatuan Bekas Wartawan Berita Harian.

It was not a lavish extavagant event but nevertheless, memorable for me, at least. I got to meet many old friends who are ex-journalists - my seniors at New Straits Times Press. Some of them were already senior journalists when I first joined NST in the late 70s.
Most of them had worked under Bapak when Bapak helmed Berita Harian in the old days.

Bapak was named one of the eight recipients of the award. He could not be there to accept the award due to his frail condition.
Nina accepted it on his behalf.

The awards were presented in association with journalists' bodies in Indonesia, Singapore and Brunei.
Two eminent journalists were chosen from each country. The other Malaysian recipient was Mazlan Nordin.

Pak Rosihan and Tarman Azzam were named the Indonesian recipients while from Singapore were Sulaiman Jeem and Othman Wok and from Brunei, Ahmad Arshad and Fatimah Md Nor.
The only other absent recipient was Othman who was not well.

They were really precious moments for me because I don't know when I'd see all of them again. I know it's silly to feel that way, but really....time flies so fast and before we know it, everyone's gone.

Strange. By midnight, Bapak would usually be asleep. But when we reached Bapak's place a little past midnight, he was still up.

Nina showed him his award. Aah, that same "puckered" smile.

He feigned ignorance as though he knew nothing about it. We could tell that it was his "clear & lucid, sharp & alert" moment because he seemed anxious to know details about the event. He just could not sustain his pretence at not knowing about the award.

Yeah. There are times he cannot fool us.

Before he could say anything, Nina told him this and that person "kirim salam". He seemed visibly pleased, and nodded and grinned.

"Siapa lagi?", he asked. We rattled a few more names that we remembered. He smiled.

Then Nina said that Rosihan Anwar, his old friend from Indonesia was there.

His face lit up.

We told him that Pak Rosihan was one of the two recipients from Indonesia.
(Pak Rosihan is the doyen of journalism in Indonesia' and one of the republic's most vocal journalists.)

"He remembers me?" he asked.

I told him that Pak Rosihan had asked about him and was a little disappointed that he was not there.

I caught a faraway look in his eyes.

What could he be thinking of?

Bapak must have reminisced and reflected on the past. That was why later that morning, he was all ready to be driven to Armada to meet his old pal.

His kawan lama. His rakan seperjuangan. 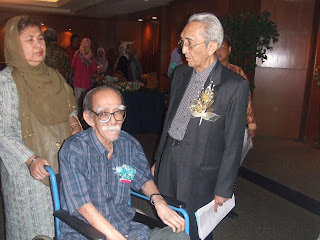 For, Pak Rosihan (standing at right) it was a delightful surprise when Bapak turned up at the third floor of Armada Hotel to meet him. 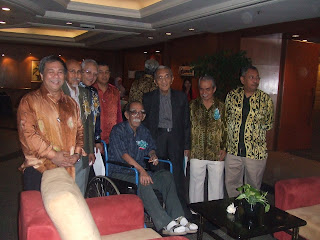 I am rather fond of 'reunions'. It rekindles friendship. It will bring reminiscence of the past. Often, it will be nostalgic. It rejuvenates "Perjuangan".

It is splendid that Tan Sri Samad and Pak Rosihan had the chance to meet again.

They say 'friendship stay forever'. Thanks for sharing this moment with us.

I hope we can be friends, as long as Tan Sri and Pak Samad had been.

Nuraina,
You have given your father the best gift of his life at the tail end of his life journey. Only he knows how much he appreciated it.

Nuraina,
When i read this posting i suddenly humming the lyrics of 'Semalam di Malaya'....thanks for sharing and i am sure Pak Samad must be feeling very elated to see his old friends.....

I see your dad still smokes.

Sorry Pak Zawi, now wheres that packet of ML of mine ....

The two giants met! How I wish I was there.

The night before the meeting, I met Pak Ros for the first time, thanks to you. So humble for a doyen. Spoke so highly of Pak Samad. "Ayah" is right, mesti banyak cerita between the two. Stories that would remain unwritten unless somebody (like you, Ena) would seriously start researching and writing you dad's bio. Like I told you, Pak Ros was talking about how your dad came to Jakarta and how he was kept "underground" (the word he used). I was intrigued but there was so little time to korek. Pak Ros said your dad was "protected" by Adam Malik then. How cool is that?

p.s. In our present context, of course, "protected" is a bad word. The word hit bottom when a certain son-in-law talked about being protected by father-in-law, and so could do this and dad for the benefit of "bangsa, ugama, dan diri sendiri".