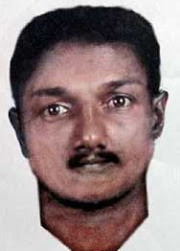 The main suspect in the murder of Johor MIC deputy chief S. Krishnasamy is an Indian man of medium built and about 152cm tall.

According to Johor police chief Deputy Comm Hussin Ismail an eyewitness saw the man, who was dressed in a black shirt and jeans, running away from the state MIC headquarters in Jalan Segget here.
He was, carrying a package and a helmet.

“The man fled the scene in a red motorcycle heading towards Jalan Wong Ah Fook,” he told reporters at a press conference at the state police headquarters here late last night.
DCP Hussin said police recovered a slug believed to have been fired from the murder weapon.

read samy's reaction. and see how he tries to extract the last political mileage from a dead comrade. i wanna almost puke.