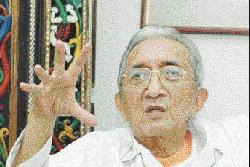 Meeting him was the highlight of my evening at the "Tokoh Wartawan Dunia Melayu" awards dinner at the Armada Hotel in Petaling Jaya yesterday.

I did not know that Pak Rosihan, Indonesia's foremost journalist was one of the two Indonesian recipients of the award.
After finding out about it from the evening's programme, I asked Norshila, one of the Persatuan Bekas Wartawan Berita Harian (PBWBH) members whether he was around.
She said he was but did not know where..
I just looked around and spotted him seated at a corner, having a chat with someone.

I must meet him, I told myself. At least to say "hello". And to kirim Bapak's salam although Bapak did not know that I would be meeting Pak Ros.
I had no doubt that Bapak would be happy to know that I'd met his old friend -- his sahabat seperjuangan.

I had met Pak Rosihan some time in 1981 when I was in Jakarta as part of the media delegation covering the first official visit to Indonesia by a Malaysian Head of State who at that time was the Sultan of Pahang.

It was my first overseas assignment and I believe it was just after Bapak was released from ISA detention.
Bapak had asked me to contact him, though I can't quite remember about what.
I got Pak Ros' telephone number from an Indonesian journalist.
I got to see him and he was very pleased to meet one of Bapak's children.

I believe there was (and still is) mutual admiration between the two men of journalism.

I made my way towards this gentle-looking elderly man. He was in conversation with someone. He looked up. I offered my hand and introduced myself.

His face lit up. He asked how Bapak was as he was aware that Bapak could not be there to receive the award.
(My youngest sister, Nina, received the award on his behalf.)
Pak Ros spoke in impeccable Indonesian-accented English (He studied at Yale university in New Haven and Columbia University in New York).
He said he remembered me.
"You came to my house in Jakarta years ago?" he asked.
I said yes although in my mind it could have also been Kak Ton who was in Indonesia in the late 80s to cover the Golkar elections.

He introduced me to the man he had been talking with.

Pak Ros asked me about Bapak and whether he was still writing.
He seemed a little sad when I said that Bapak had not been writing due to his frail condition.
"How is his mind? Still sharp?" he asked.

I asked him how he was.
"I'm fine, considering my age", he replied. "I am older than your father by three years".

If he had not said so I would have thought that he was younger than Bapak.
He certainly belies his age -- all of 86 years.

Time did not permit me to spend more time with Pak Rosihan, Indonesia's renowned journalist and author .
Another time, I hope. Another place, certainly.
Posted by NURAINA A SAMAD at 1:02 AM

Ena,
Thank you for introducing me to the man. He is awesome. And he looks a bit like your Bapak, too (I told him so and he LOL). Pity Pak Samad could not be there. There would have been a lot of carut marut and maki hamun (four-letter words).

The event was well done. Kudos to Dr Alias Mohamed and his team from the ex-BH journalists association.

Pity Manja, the current group editor of Berita Harian, and Hisham , Manja's predecessor and the current GEIC of NSTP, were not there. Much they could learn from Pak Ros and the other veterans, just by listening to them.

p.s. Zainudin Maidin, our Information Minister, also not there. Wonder why ....

Nuraina'
Saw Pak Rosihan on RTM1's 7 am news today. He difinitely didn't look his 86 yrs with a mind still very sharp. God's gift to him for being such a great man that he is.

I'm telling myself, lucky anak2 Pak Samad blog and I'm an avid fan of their blogsites. Now I can claim to two degrees of virtual separation from this huge tokoh penulisan melayu. :D