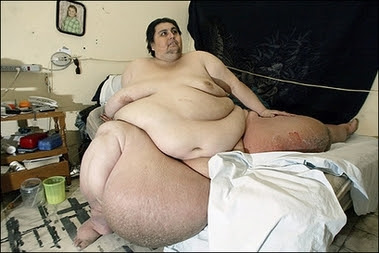 Meet Mexican Manuel Uribe who tips the scales at 560 kilograms (1,234 pounds) and is possibly the world's fattest man.
The picture above is of him at home in Monterrey, Mexico, taken in 2006.
He will be listed as the world's fattest man by the Guinness Book of Records but he has lost 200 kilos (440 pounds) and that may make him the man who lost the most weight.
Here's the AFP story:
"I'm glad to be in the Guinness Book as the fattest man. I am also happy to have lost 200 kilos," the 41 year-old said.
Uribe was able to leave his home in Monterrey, northern Mexico in March aboard a trailer to celebrate his weight loss.
Guinness has recognized his weighty achievement with a glass plaque. "They gave it to me, I have it in my hands," said Uribe, who founded an organization to help overweight people.
Uribe's photograph appears in the 2008 Guinness Book of Records alongside a description of the treatment he has had and offers of surgery he has received.
Uribe said the editor of the book had promised to visit him next year, and held out the possibility of appearing in the 2009 edition as the man who had lost the most weight.
Uribe appeared on television in 2006 seeking help for his excess weight, which has plagued him for more than 20 years, most of which he has spent in bed.
Posted by NURAINA A SAMAD at 7:30 AM

My heart bleeds for Uribe and the tremendous ordeals he must have gone/be going through to manage his health condition.

For obesity is a health problem, sometimes inherited, sometimes acquired through improper or uninformed management of nutrition and diet.

But once it's in your system, it grows like a cancer and for some incurable, because they seek help too late in the day.

In Malaysia, our unhealthy eating habits are compounded by the availability of cheap food (local and foreign) soaked in oil, cholesterol, sugar and salt. Food type is addictive; we acquire the taste for different foods easily. We all have our favourite, fast, fat food (4Fs).

I too indulge sometimes but I exercise like hell - to trim off the fat and the spare tyres!!!

I saw a tv documentary on Astro featuring Uribe. My heart goes out to him.

They interviewed his parents and the mother said she would like nothing more that to see him walk again after the by pass surgery.

I hope he can walk again soon.

salam kak ena,
wah, he lost 200 kg. thats about the total weight of me and my kids!

should i be guilty having a blog like mine?....

OFF: you are in perfect shape, my dear. fantastic. not many women can do that - having the discipline to burn off all the fat.
keep it up. an inspiration to me.

zai: oh, my dear zai. don't even think it! if that had been the case, then, half your readers/fans would have complained to you about getting fst and fatter.
the dishes you post have no bearing on the state of obesity of anyone.

When I clicked on your blog link today, before the photo appeared, my eyes tricked me into reading the title of your post as "World's Fastest Man". Then the photo appeared, and I thought to myself, this can't be the world's fastest man... so had to move my eyes back to the title before reading further. Oh well...

pi,
now, can u imagine if he was really the world's fastest man?

Kak Ena,
If he was really the world's fastest man? No, I can't even imagine it...

I usually bloghop lepas subuh, sementara tunggu hari cerah to go out and do my gardening routine. So yes, it was quite early. Taklah lama sangat for the photo to download, but I still got to read the title first...

off topic a bit, sure you are welcome to drop by my small shack here...and thanks for your visits and kind words...

and Pi Bani is quite hilarious sometimes...visit her blog quite often too...

Aunty Ena,
My mum sends her bestest regards to you, Mia, Kak Teh and Fati.
And she really appreciate her bday wish.
Salam to all.

pi: i knew it. mesti lepas subuh.
and you do gardening? you must be a very patient person.

zai: ok...i shall keep that in mind. Insyallah if i am ever in seremban.
and yes Pi has such a sense of humour. i think it is important to be that way to be doing what she's doing.

and do kirim salam to you mum! one of these days I will kacau her.

I saw this Uribe guy when I watched BBC World whilst being interned. He is definitely the heaviest person alive today.

This guy went into obesity where if he needs surgery, most probably the surgeons are not able to help him.

Anyway, I did by gastric by-pass surgery on 4 July. Today, I weighed myself this morning and found I hv lost 15 kg.

So it worked! Need to shed some more, though :)

This is Idin's writing (he's next to me, reading your blog together-gether with ibu) :

"WOW!WOW!Uribe lost 200kg?!!Thats about 10 times my weight!In my participation in the tae kwon do tournamentthey cant find any lighter category for me, so I had to join under 20 kg aka feather weight."

Errr.. sorry, i promised him i won't correct anything. So, there you go :)

wow, such a fine achievement to have lost a staggering 200 pnds.

cant help but notice how huge his boobies are. dang.

bigdog: 15kg? that's good. and i hope you lose some more. i know you will.
big dog, this guy makes you look so slim-lah
take care.

Idin: goodness. i think you'd be perfect for kung fu!

oops, my apology pn Nuraina. i swear i didnt mean it in any ways sexual.

where is your tuesday with bapak?

I hope I will not grow up like Uribe.

By the way, waiting for your Tuesday with Bapak.

Its their own fault their fat.

Omg he can't walk does he need a mobility scooter ? Aww best wishes for him , DIH =] xx

Thank u so much for having such a nice and entertaing stuff for us. I really enjoy your blog and the way you have describe your content.I also have some amazing and wonderful stuff and i wana to share it with you.
World Records List