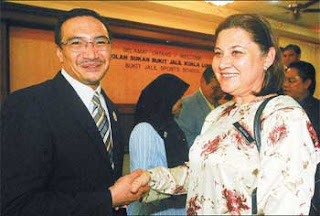 Everybody remembers Marina Chin, the awesome sportswoman of the 70s. Don't you?
Well if you were in secondary school in the early 70s, you would.
Back then, she was an inspiration to so many girls in sports.
Marina, who will be 52 in October, shone during an era when sportsmen, sportswomen and footballers were the nation's pride.
And they were deserving of the accolades they got.

So apt and fitting that Marina was dubbed Malaysia's "track queen". She was Malaysia's fastest woman sprinter and hurdler and one-time Southeast Asia's fastest. Also, she was really a beauty queen (Railway Beauty Queen in 1975).
As a student of Convent Sentul School in 1971, she represented her school in the Selangor Schools' North Zone Athletic Championships in KL and won in th Class 2 100m and 200m sprints.
The same year, she also ran her first international game in the 4X400m -- the 1971 SEAP Games at Merdeka Stadium, KL.
No surprises that she was named Selangor Sportsgirl of 1972.
In March the following year, she broke the 200m record with a time of 26.6, beating the old mark by 0.2 second in the Selangor Amateur Athletics Association Allcomers Meet at Stadium Merdeka.
In 1975, as a teacher trainee at the Seri Kota Teachers Training College, she won a silver medal in the 400m hurdles, Asian Athletics Championship in Seoul, Korea.
In September the same year, she won the 100m hurdles with a new national record of 15.2 and the 400m hurdles in 64.9 seconds at the Singapore Open Athletic Championships in Singapore.
In 1976, she won a gold medal in the 100m hurdles clocking 15.3 seconds at the Philippines Invitational Athletic Championships in Manila.
At the Malaysian Open Athletics Championships in Alor Star, Kedah in August 1976, she set a national record with 28.4s seconds in the 200m hurdles.
In 1977, she was named Sportswoman for the Year 1976 and also Selangor Sportswoman of 1976.
There were several achievements for Marina in 1977 that the following year she was again named Sportswoman for the Year 1977.
In 1979, Marina, Saik Oik Cum, V Angamah and Zaiton Othman scored Malaysia's silver medal in the woman's 4X400m team at the Tokyo International Asian Track & Field Championships.
She was unstoppable. She won gold medals in the 100m hurdles and the women's 4X400, relay team at the 10th SEA Games in Jakarta the same year.
Marina would have continued to blaze the trail but she had to leave for further studies to the US in 1980.

Now, she'll be training our young athletes to be champions. Marina has been made principal of the Bukit Jalil Sports School (BJSS).

(Picture above of Education Minister Hishammuddin Hussein congratulating Marina on her appointment yesterday.)
Posted by NURAINA A SAMAD at 6:02 PM

My memory could be faulty
but somehow i remember Marina as having some cute freckles on her nose. And that she and that other awesome athlete, hurdler Istiaq Mubarak used to be an item. Just wanting to see if my memory is intact.Please confirm, somebody, at least the freckles bit.

I smiled this morning when i saw this picture in the paper...yes i remember those days, i did not get to take a picture with her but i had a picture with Rabuan Pit, both of them were my idols those days....i love sports but now jadi spectators jer la except recreational tennis when cukup chorum...

KG: your memory is not faulty. Intact. About the freckles and the couple thing.
But that was history (as far as the couple thing,. dont know about the freckles, though).
She and he -- very the history. i know i know....we all thought they looked good together. a handsome athletic couple.
last i heard she was married to a Punjabi guy. They've got 2 kids.Last I heard-lah.

those days, our heroes were athletes, sportsmen/women, footballers, badminton players....

Wow... I remember Marina Chin. I was in primary school then. She was definitely an inspiration.

Oh! those were the days.
It is true what you say. "those days, our heroes were athletes, sportsmen/women, footballers, badminton players...."

aaah, another word from yesteryear -- muhibbah.

i love those days when sports was sports...

who doesnt!! dont we all want to have looks and be athletic like her! Thanks again, ena.

I still remember the South East Asia Games 400m hurdles event held in Kuala Lumpur where she was the hot favourite to win. She hit one of the hurdles, lost her momentum and the race to another Malaysian, Jessica Lau. If my memory serves me correctly, Rahim Razali said something like, despite the win, Jessica lau is still overshadowed by the one and only Marina Chin. I know shadow, and eye shadow then, but that was the first time I heard the word overshadow.
aMiR

Marina Chin...suddenly she's thrust up in the limelight again. I thought I could be a runner like her alas.......those dreams had long been buried .

I think she was the sexiest beauty queen on the track .When she married ,I remembered Lat making a caricature of her ...sleeves rolled up , sweat on her eyebrows and a rolling pin in her hands ...making the chapati.... thrust Lat to leave me an imprint of my favourite runner that way .

Ah...if you had taken up sports serously and passionately, you'd really have given Marina Chin a run, sprint, hurdle, for her money, i tell ya!
You'd have easily been the Track Queen. Hands down!


dancy: yes...she was every guy's poster girl. great looks, great body and everything else.

Congratulations to Marina Chin. She is the apt choice to head the Sports School. Not only a sportswoman herself but also well qualified for the post. Under her tutelage Malaysia should be able to produce future champions. I beleive she is married to Jagjit Singh who is also a sportsman himself. Rugby is his game. So definitely she will have his full support.

Oh Marina ... reminded e when you were in those shorts competing. My adolescent wet dream.

zawi: yes... i hope she stil has it...so that she can pass on whatever that she knows and has learnt to her young charges.
i hope she can make a difference.
God, we need champions now! we need role models.
thanks for the update on her.

er..i noe its kinda late for me to give a comment on this.. i wasnt born yet during this marina or rabuan's excellent years in sports arena..but i do adore them though.. especially rabuan pit... cos he's my dad...:)

now. don't get me wrong. if you are indeed rabuan pit's daughter, then i am honoured to have you visit my blog.

rabuan pit was my time. everyone remembers him!

hi..i could be interviewing marina chin for my journalism assignment. my partner and i are thinking of asking some not run-of -the-mill questions. so we thought of asking her what she thought of the lat strip. i've tried to find that particular strip but have so far come up empty handed. Can you help me, please?

Nuraina,
Here are some facts on Marina Chin... She is married to a punjabi man by the name of Jagjit Singh who also was a malaysian sportsman in Rugby... they're hapily married with 2 kids named Jasmine Kaur Bhatt born on the 22nd july 1985, and second Ashvinder Singh Bhatt, born 16th feb 1988..

It is very interesting for me to read that article. Thank you for it. I like such topics and everything that is connected to them. I would like to read more soon.

It is certainly interesting for me to read the blog. Thanx for it. I like such topics and anything connected to them. BTW, try to add some photos :).

Pretty interesting site you've got here. Thanks for it. I like such topics and everything that is connected to this matter. I would like to read a bit more on that blog soon.

Pretty cool blog you've got here. Thanks for it. I like such topics and everything connected to them. I definitely want to read more soon.

Pretty nice blog you've got here. Thanx for it. I like such topics and everything that is connected to this matter. I definitely want to read a bit more on that blog soon.

Interesting post you got here. I'd like to read more about that theme. The only thing I would like to see here is a few pictures of some gizmos.

Excellent information. I found your website perfect for my needs!