Nat To Be Detained Until Tuesday 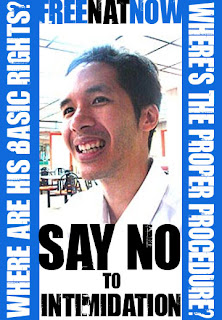 Nathaniel Tan (Nat Tan of http://jelas.info) is being investigated for an offence under Section 8 of the Officials Secrets Act (changed from last night’s Section 420 of the Penal Code) , i.e. possession of ’secret’ documents published on the internet, which alleged that deputy Minister for Internal Security, Johari Bahrum, was involved in the ‘fee-for freedom’ scandal. - This is the latest posted by ELizabeth Wong's.

Today, the police obtained from the Magistrate's Court at Jalan Duta an order for Nat to be remanded for 4 days - from today until Tuesday.
Eli said that they had wanted to ask for the maximum 14 days but got 4 days instead.

This is what Sivarasa Rasiah, the lead counsel for Nat, said outside the courts after the remand hearing:-

“We are revisiting 1998 - this is a political detention.

“The remand serves no purpose except to put him (Nat) under duress.

“He has given his full cooperation; they have taken documents, CD-Roms and computers from his office, home and car.

“If the remand is for investigation, why continue to detain him when he has given everything? This is a ‘fishing’ expedition. There is clearly another agenda behind this.

“This is purely an act of oppression. I want to go on record that his detention is political motivated.”

When I was first informed of Nat's arrest and detention yesterday (Friday, July 13), I was shocked. As most people must have been too.
'The Special Branch got him under the ISA?", was my first response.
(Obviously not, as we were to find out later.)
Details were sketchy then. Just that three guys who claimed to be from Bukit Aman had taken him away to Bukit Aman "to talk with him about the internet".
They took his laptop as well.
Then there were speculations that he might have been abducted because Elizabeth Wong was told by the officers at Bukit Aman that there was no Nathaniel Tan in custody at Bukit Aman.
For about six hours, Nat was "missing" because there was no confirmation of his detention in Bukit Aman.
Now, I don't know whether it was a relief to have finally confirmed that Nat was indeed in Bukit Aman.
I suppose it is better than him being held by unknown people in an unknown location.

I had feared the worst. Must be his blogging and his activism in an opposition party, Parti Keadilan Rakyat, I thought.
Looks like I am not wrong.

Fifty years of nationhood. We have to be proud of that.

Nabbing Nat the way they did?
That's how we still deal with opposition party members. Or whoever else?

Also read Rocky's Bru.
Get updates from Politikus, http://jelas.info and http://bangkit.net.
Posted by NURAINA A SAMAD at 5:45 PM

Hi Nuraina,
Your father was also the victim of a serious injustice.

That was many years ago, but its sad that its still happening today.
50 years independence ?

Hang on there bro Nat. We are with you.