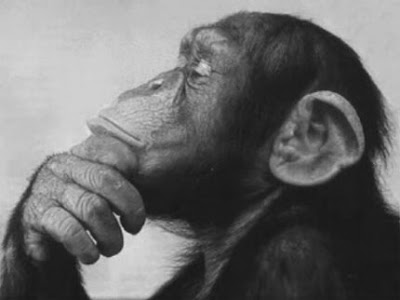 Khairy issued the warning yesterday, in Kimanis (Sabah). He said that Umno wants these, er, monkeys to be brought to book.

Here's the rest of the story: Khairy said these bloggers did not think about the sensitivities of others and the repercussions their writings can cause.
"There are no laws in the cyberworld except for the law of the jungle. As such, action must be taken so that the "monkeys" behave," he told reporters after opening the Papar, Kimanis and Sipitang Umno Youth annual delegates conference here today.
Khairy said there were some bloggers who thought they were above the law.
He said this when asked about Malaysia-Today webmaster Raja Petra Kamaruddin being called by the police for alleged seditious comments posted on it.
Khairy added that he too had been slandered on websites but had yet to take legal action because the case might take a long time to be settled.

I agree. Indeed, we have to make "monkeys" in cyberspace or anywhere else behave. Small monkeys, bigger ones, bloggers, politicians, civil servants...
No one is above the law. No one.

So, okay. Let's have the monkeys' names!

now everyone's going ape about it.

will i be labeled as one too for writing about life as a chimp? ahem...i mean, Gimp.

"Khairy said these bloggers did not think about the sensitivities of others".

Did he ever think of the sensitivities of others? On several occassions he didnt care the least of other peoples sensitivities too. Do I need to give examples?

It is getting more difficult to be nice to this boy.

How right, no ONE is above the law, and that (should) include that perp calling bloggers, monkey!

Hmmm, wonder what Bernard Zorro would make of this - especially after his last post "Pay Peanuts / Get Monkeys". Or wait, could it be that perp paying the RM2750/- mo. (ono) CyberWhores! - Was he referring to them? :)

what about the behaviour of those MPs in parliament degrading women? what about those keris waving ministers and foul mouth politicians who threaten commoners? Arent these behaviour even worse than monkey blogger?
he who stays in glass house, refrain from throwing stone.
am also told in psychology that such name calling is a sure sign of depletion of grey matter up in the head. any shrink to confirm that?

Wow,you guys must have done something right.
bn monkeys is jumping up and down like kena belacan.
good job bloggers for putting up the sign "Please Do Not Feed The Monkeys"
is this the the sign of them running 'amok'..mmm..i wonder!!hahaha...

its out in the clear now by KJ although this must have been fudged by his name calling of bloggers as monkeys. the strategy is go after prominent bloggers to instil fear and chill of the hearts of the rest of the blogging community. Based on what he said, it is mighty clear that accusations levied against blogging community is nothing but trump up charges so as to control and stop the blogging community from highlighting excesses and corruption in the government.

Monkeys...? That reminds me of a photo taken sometime ago during Ijok election .. t-shirt with a logo .. I guess it might meant Berok Negara.

If he thinks bloggers are monkeys and they (we?!!) are just monkeying around, he would soon be in real trouble that boy.

All these name calling and fear factor challenges are only further fueling the repressed anger.

To make the MBs (monkey bloggers) behave, all the MPs (monkey politicians) need to behave first lah. Leadership should be by example kan?

I like it when someone called me Monkey! That means that someone acknowledged me as ' very active, bright, super intelect and living high up on tree looking down at moron like that someone'! he he he

Errrr...By the way, KJ - that statement is especially meant for you...

let me tell you that frankly, i take no offence at all.
i mean... hey it's Khairy.
besides, i'd like to know who among us have been posting seditious articles.
and finally, and seriously.... I am a monkey. I was born in the year of the monkey...

if bloogers are Monkeys, what do you call the MP's? Leeches?

I ask monkey khairy one question - when has umno apologise for trampling on someone else's sensitivity. Khairy is only interested in Umno's sensitivity. he doesnt give a damn about hurting others.

fil : Never mind the one outside---tend to the ones inside.

This statement by Khairy does not apply to me. I am a dog!

In my world, its a "dog-eat-dog-world". That's why we sometime "bark at the wrong tree". Of course 1901's is my favourite hotdog.

Dog is very important in peoples' everyday life. So many expressions are used by man/woman in reference to us.

"I'll grind you to dogfood!"

"I don't want to see your dogface anymore here!"

Anyway, Micheal Jackson and Paul McCartney said this in "The girl is mine" from the album "Thriller", "Doggone girl is mine!".

Once upon a time I was proud to be a Malay, I then thought Umno had done great service to the country and the Malays especially. The cry of "hidup Melayu" meant the rights of the Malays were to be protected at all cost, and nothing more than that and the non-Malays should not be afraid of. Today being in Umno means to acquire wealth at the expense of the people, the Malays especially, they (the leaderts)have gone awry in so far as protecting the rights of the Malays is concern!
People like Dollah Badawi, Anwar Ibrahim and now Khairy Jamaluddin scare me because I have no idea what they are fighting for except that these people are seen to be very close to people who are seen to be close to Singapore!
Recently in Langkawi I found out a big piece of land belonging to the Fishery Department and given to a Malay entrepreneur for shrimp farming will be take back and to be sold to Singaporeans. These Singaporeans will turn the land into a golf course, but the thing is this golf course is very near our naval base, so what is going on in so far as security is concerned! Kesimpulan nya saya sabagai saorang bangsa Melayu tidak kisah dan peduli lagi apa yang sedang dan akan berlaku di negara yang di ketuai oleh saorang pemimpin yang di anggap lemah dan tak bermaya berpolitik untuk menjaga kepentingan Melayu lagi! Terima kasih!

Salam, Kak Ena. I think that the bulk of the monkeys are made up of Malaysian politicians. While some civil servants are indeed monkeys, there are quite a few who aren't, but the monkey politicians are making sure that they 'tow the line', thus causing their hands pretty tied. So, I'd say... SOME civil servants are monkeys. And the politicians are trying to turn lots more into monkeys too! Sigh.. when will we ever learn??

Was quite surprised when he referred to bloggers as 'monkeys'.

Wow - the future is so bright, I need aspirins.

There is a shameless monkey living on the power of the father in law.

Who will this OXbrain be without the father in law????????

--he'll be an OX-brained monkey with a monkey fil.