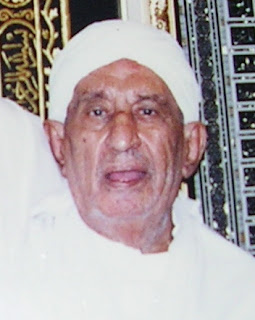 The late Tunku Abdul Rahman used to call him "The Tiger of Malaya"* for his fiery speeches in the early days when Malaya was fighting for independence.
They remained good friends until the Tunku's passing in 1990.
Shekh Mohd Hussen Bakar Rafie, born in the holy city of Makkah passed away shortly after 6pm on July 2, 2007 AD@ 17 Jumaada al-Thaany 1428 AH at the grand old age of 107.
His grandaughter, Athene, wrote in her blog that he was "the major strength behind Al Mashoor Islamic School, counting many political & religious leaders as his students.
"Among them were Dr. Burhanuddin Al-Helmi, Datuk Dr. Hassan Din, Shamsiah Fakeh, a number of Muftis of many states plus numerous other well-known figures whose name just slipped my mind at the moment."

"He lived such a full life, loved, respected and sometimes even 'feared' by those whose life he's touched. In those days, his signature confirms enterance to Al-Azhar University, there are a few very well known 'ulama' who got to where they are through this method - of course they were tested by him first, his standard's very high!"

*Please, not to be mistaken for the other Tiger of Malaya - General Tomoyuki Yamashita who led the Japanese Imperial Army in the invasion of Singapore in February 15, 1942 and, after the war, was later tried and executed for war atrocities against the Allied Forces and civilians.

Thank you from all of us for honoring the great man.

I just came back from the funeral, preparing for the 'tahlil' tonight.

There's so much to say and so many things to do. I have to go on auto mode now.

The grieving has to wait.

There must have been many more Malaysians who passed through this life, who left something valuable for the living Malaysians, but of whom we know very little. Thank you for letting me know one of our unsung heroes. May Allah bless his soul and may we not forget what he did.

My fatihah for the man.

I hope you would blog abt him becasue we need to keep the struggle of such great man fresh in the mind of the young.

I am afraid the way things are going we are cutting away from our past to progress and adopting for teh sake of adopting frm other cultures and models without consideration fo our unique history, culture and struggle.

What is a tree without strong roots?

Hey, you added the photo... Thanks.

yes. i added the picture. I am glad i did.