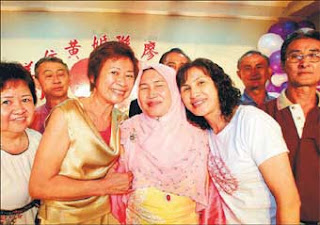 So nice to read about Hashimah (born Wong Siew Hong) who was reunited with her biological siblings in Johor Bahru yesterday.
Hashimah, an insurance consultant, was given away at birth 49 years ago to a Malay family.
"I am very happy," she said, surrounded by seven of her brothers and sisters (picture top left).
Read this happy story here.

And so terribly heartwrenching to be reading this story about four-year-old Shearwey Ooi Ying Ying (picture left) whose charred remains were found strewn in at least four different places -- a cemetery, river and an apartment dumpsite in Paya Terubong and another river in Jalan Air Itam.
Her mother, Jess Teh Hui Wen, 28, reported her missing on Friday. (Picture top right is of Jess with a friend.)
Police found her remains after they detained a couple -- a 28 year-old woman who is a close relative of Ying Ying and her boyfriend, in his 30s.
It was the boyfriend who took police to the gruesome find.

With a crime story like this, the newspapers are not naming names. But you can figure out who the "close relative" is.

Read the stories here and here.

Oh... poor little Ying Ying. How could she have fought the monster to save herself?
Posted by NURAINA A SAMAD at 12:09 PM

What on earth do they get by murdering the innocent child anyway?? Tak paham betullah...

Hi Nuraina,
I'm a parent with a 3-year old daughter.

The sheer awfulness of Shearwey Ooi Ying Ying's death really saddens me.
Now I read that the mother is a suspect in the case (it was published in some Chinese newpapers). I really don't know what to think of this - this has really spoiled my Monday morning...

It's written to go this way. When it's time that it should happen, there's nothing we can do about it. Only Allah knows best.

Sorry Ena, I'm so naive...who is the 'close relative'? Poor little baby...I have a little post on her too.

monday morning couldnt get any worse than reading about the tragic demise of shearwey. its cruel and down right sick. how could someone be so heartless is beyond us.

personally, having a 4 year-old niece and to be reading such sends shiver down my crooked spine. May Allah protect us all. Na'uzubillah.

for once, mob law should take place and burn the culprits down.

I am noraini, nice blog u have... would love to make a link in my fav list..

Ya Allah, what is happening to our people? And please, why leave a lil girl unattended in a car even for a short while? Let's hope the guilty ones in this case are proven soon and that everyone else learn from this incident. Not a good day for me to be reading this, may Allah bring the wrong-doers to justice soon...

Its the mothers doing. How could a mother be doing this to her own flesh and blood? Its despicable.

Why are some people so cruel? Hate to think what the little girl went through before the criminals carried out that horrendous act. Heartwrenching, indeed.

ena, what kind of beasts are these? This sounds like summer nightmare reading in the UK.

This reminded me of the Susan Smith case who rolled her car into a lake with her two young sons still strapped into their carseats.

She led the whole world to believe that someone kidnapped her kids.

Her boyfriend had earlier dumped her as he wasn't ready to be an instant father.


Could this have been the motive in little Shearwey case ? As it was reported the suspect (the mother) was in the midst of a divorce.


And whhat about the 10-month old boy found floating in Gua Musang? The mother was also remanded as a suspect.


Why are all these people murdering babies ???!

Star repcrted that the mother and her boyfriend had been remanded for the murder of the little girl.

It's horrible...despicable if they are the ones responsible for killing her.

How could she do that to her own daughter & then misled the public?

It's so cruel. How could the mother have done that? How could she?

according to Kosmo and many other newspapers, the child drown while the boyfriend gets high. then, the mother came back, only to find her only child is dead, somehow or rather they cracked a plan to get rid of the body and stage a fake kidnapping.

I think if they just own up, they might get away with it. if it's true as what was reported, it was negligience, nothing to do with murder or anything.

but, by disposing the girl in such manner, spelt something more disturbing.

how can a mother do that? when many other women are trying to conceived, this mother simply let it go, their precious bundle of joy.

I second that, Rocky's Bru, memang betul2 sial. Death is too good for these scums of the earth. How could they?

It's her mom who did it. What kinda mother is this???