Of Old Rivals and a Mansion in Perth 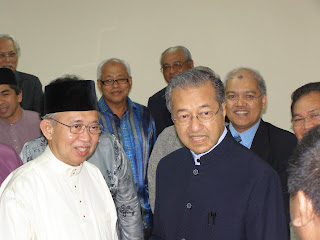 Dr M "exposes" PM and Meets Tengku Razaleigh
I am way too late here. If this blog were a newspaper, it would've been scooped by other newspapers-- left, right and centre, as they say.

Dr Mahathir Mohamad was in Kulai, Johor on Thursday (March 29) to speak at a forum.
There he addressed some 800 Umno members and others, and spoke on Umno, the Malays and a mansion in Perth, Australia, purportedly belonging to the Prime Minister.
He said much much more. I was not there so I cannot quote him.
But, blogger BigDogDotCom was.
In his posting, "Tun Dr Mahathir Strikes Again", he quoted Dr M as saying:

“The fate of the people is determined by the people themselves” and “The people gets the Government they deserve”.

The forum, at Kelab Taman Puteri, was on Malays and Globalisation. Dr M was invited by the Kulai Besar Umno division.
Read more here. And by A Kadir Jasin and Ruhanie Ahmad.

Malaysia Today also has the story. You may want to check out AP story here which according to Rocky's Bru is damning.

Yesterday, (Friday, March 30), Dr M was at Universiti Malaya in Petaling Jaya to attend a lecture, “The Thoughts and Vision of Tun Abdul Razak in the Nation Building-Nation State, Across Ethnic Boundaries”. It was held at the Main Hall, Akademi Islam.
Tengku Razaleigh, former Umno vice-president and and Semangat 46 president, was invited to speak at this round of lecture series.
Dr M was also invited to speak. He spoke off-the-cuff , according to BigDogDotCom who attended the lecture.
Both Ku Li and Dr M were invited by the Federation of Malay Development and Education Organisation.
BigDogDotCom said about 150 people were there.
Dr M and Ku Li were political rivals. They may no longer be.
I can count the number of times they have been seen together. Usually their being seen together was coincidental.
At the Universiti Malaya lecture? Your guess is as good as mine.
Could we be seeing a comeback of these two veterans and once powerful Umno leaders?
(Photo of DrM and Ku Li at Universiti Malaya, courtesy of blogger Shahbudeen Jalil. )

Read BigDogDotCom's post on the event as well as on Ku Li's speech here .

The Scribe, A Kadir Jasin, who was there, commented in Rocky's Bru .

Meanwhile, DPM Najib Razak wants us to continue feeling good because "things are changing" in this country.
Better development, better leadership. A great future for Malaysians.
Najib who is Umno deputy president said this yesterday (Friday,March 30) after chairing the Umno supreme council meeting on behalf of the Umno president (the PM) who is overseas.
Posted by NURAINA A SAMAD at 9:41 AM

there it goes... the fighting re-begins

I have the utmost respect for DrM. Though as a muslim, i am fully aware that idol worshipping is a big no-no, i will state it clearly that i idolize him and to hell with the religious consequences.

Nonetheless, though he is my idol, i am fully aware that he is not without faults. As RPK has pointed out previously, Mahathir is not free from making mistakes but when he is right, he is absolutely right.

I concur wholeheartedly with his observation,but must also add the qualifier that the reverse is also as true, if not more so- when Mahathir is wrong he is almost absolutely wrong.

And with regards to his statement 'the people get the goverment they deserve', in Malaysia at least, and comming from him, i disagree with him 100%.

In fact, i find the statement not only 100%inaccurate but 200% irresponsible.I have a suspicion that it was uttered to absolve his own sense of guilt for the signal role that he played in giving us ,the people, what he deemed "a half past six goverment, with no guts".

In Malaysia, the goverment we get, and more importantly the Prime Minister that we inherit is what Mahathir gave us. Mahathir more than anyone else knows this- after all, he has on countless occasions admited the fact that the person most responsible in making him a Prime Minister is Tun Razak, which was executed through his succesor Tun Hussin.

Both respected gentleman, are of course, former Prime Ministers.

Like it or not, though it is right that we, the people, are the ones who chooses the goverment thru elections, nonetheless, it has to be remembered, malah, WAJIB DIINGAT, that the only actual power that we have in that process, is by an act of delegated athourity. We, the people, after all, have only direct control in the choice of our MP's, our Parliarment. But in the choice of ministers, of our cabinet, the only body of people who speaks using the name 'the Goverment', we actually do not have a direct say.At any one time in the life of our country, only one individual has that priveledge- the Prime Minsiter.

So i repeat it is wrong and highly irresponsible for DR M to say ' the people get the goverment the deserve'.Maybe the MP's yes, but not the goverment at least not the cabinet and most defeinatelt not the PM.

After all,who appointed Semi Ve-Looo as a minsiter?U, the rakyat or Mahathir and Kaki Tido, the PM's?

How about Nazereee?We the rakyat are told by the Gormen to have manners but how about this chap? In terms of being a well behaved model citizen, he must be leading by example....Did we appoint him as a minister?And how about previously, the 'couteous' Tok Mat or the great Sabbaruddin 'tounge in cheek' Chik?

Infact, we only have the choice of electing our MPs but we do not have a say on who becomes the candidate for MPship.That choice lies with the political parties. So though u may have grouses with the individual candidate, nonetheless, because he represants the party that u beleive in( or rather u distrust least)u will still cast ur vote in favour of him.so in choosing a goverment, it is more accurate to say that the rakyat has only a REAL MEANINGFUL choice in choosing the political party that forms the Parliament, BUT NOT the individuals that stands as candidates for elections, what more the make up of the cabinet, the most important descision making body in the Goverment.

So please YABhgia,Tun Dr Mahathir sir, do not try to find an escape clause or quick exit route to appease your sense of guilt in giving us these current bunch of goons.We, the people, do not have a say on who resides and walks the corridors of power.

AT LEAST NOT AS MUCH AS YOU DID FOR 22 YEARS!And more, if u count that the current jokers are remnents of your tenure!

So pls dont try to pull a fast one by saying 'the people gets the goverment that they deserve'.No sir, it is patently not true. For twenty two years we the rakayat got the goverment that u gave us or rather foisterd on us, regardless of whether we deserved them or not.

So stop passing the blame to us ordinary insignificat mortals for the appointments of ministers and sucssessor that U choose.We did not have the priveleged. Only u did.

In terms of getting the goverment that we have, we got what you gave us, Sir, and what WE, THE RAKYAT, DONT DESERVE IS BEING TOLD OTHERWISE, BY YOU!

So Jln Sudin,apart from getting that part of his speech ABSOLUTELY WRONG the rest he GOT ABSOLUTELY RIGHT!Wow, what a typical Mahathir speech!

Hot stuff we have here. Rock on!

I disagree with Mat Hubris. Yes, we can now blame Dr M for allowing Abdullah Ahmad Badawi to be the PM. But when AAB was made PM, I remember that many people hailed him and welcomed "Mr Clean" with open arms. Dr M has realised his mistake and is openly admitting it now. I used to wonder, how could Dr M got it so wrong with Pak Lah. But I also recalled thinking that, hey, Pak Lah wouldn't make a great PM but what we needed was a good PM. And then things started to happen that opened my eyes to the real Abdullah, the serious flaws, the greed of some of the people around him, the scandals involving family and friends, the attempts to shut Dr M, the lies, and the lies, and more lies.

The people deserved the government under Dr M because the people voted him in, GE after GE.

If the people go to the polls at the next GE and vote Abdullah and Nazree and Zam and Samy, then the people deserve to be governed by them for another term.

I am breathless with Mat Rempit Hubris' take on Mahathir, "When he is right, he is absolutely right."

Our Mat Rempit Hubris is really a terror with wisdom. :)

I must now revise my perception of mat rempit.

Hubris means a very proud way of talking or behaving that offends people.

Cannot find the meaning of carthage.

Nuraina, thanks for your TWB. Am an ardent follower.

Some people can be fooled some of the time. Dr M is one of those people. So are we. Who would ever imagine that mr clean will turn out this way. He was smart. He is surrounded by 'smart' people. But 'sepandai-pandai tumpai melompat....'

So mat hubris, let's not blame dr m. We have been fooled.

I agree with u.

In fact in my opinion we shouldnt be blaming anyone for being fooled by Kaki Tido.Blaming is useless.

By the same token, Dr M shouldnt be blaming the people if they again vote Kaki Tido in.

If he, as a former PM, with all the information that he has, thru the polis, Umno, BTN, Jasa, and a whole host of other inteligence gathering apparatus can be fooled, what more the ordinary pakcik and makcik whose only source of infomation is what the Kaki Tido media innundates them with. To paraphrase what George Akerloff said " the quality of your decision is hostage to the quality of infomation that u have". Thus if DrM can be fooled by someone he sees up close, can u imagined the ordinary raayat who only see's Kaki Tido from a distance and then, mostly thru the media that he controls.

Nonetheless, in my opinion,under the circumstances, the best approach is to search for the solution and not the blame. And this should be followed more by DRM than to any ordinary fella on the street. He of all people should not be making irresponsible statements like 'the people get the goverment they deserve'

BUT if DrM is insistent on appropriating blame than the responsiblity of wrongly choosing a succsessor lie with him, more than anyone else.

After all, he more than anyone else knows how easily it is too be fooled.