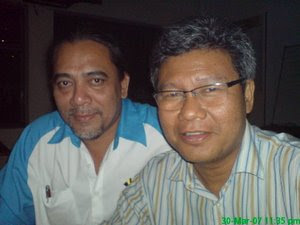 Now, it's Rocky, NPC Adviser
Rocky (Ahirudin Attan) decided not to seek re-election as president of the National Press Club (NPC) because he wanted to "do other things".
"Two terms, enough-lah", he remarked.
The NPC election is held once in two years.
Rocky was elected NPC president in 2003. In the 2005 election, he won unopposed.
Last evening, (Friday, March 3 2007), the NPC held its annual general meeting and election of office-bearers.
Deputy president Mokhtar Hussain, an editor with Bernama, was elected unopposed as president.
Veera Pandian of The Star was elected unopposed as the deputy president and Joe Fernando, also of the English daily, was elected unopposed as the vice president.
Jugjet Singh of the New Straits Times was elected unopposed as the secretary and Jane Ritikos of The Star as assistant secretary.
S.P.Manivasagam retained the post of treasurer, also unopposed, while the assistant treasurer's post went to Lum Chih Seng of the Oriental Daily.
Eight committee members were elected; Jairajo Letchumanan, Krishna Rao, Sharmini Darshni, Anthea De Lima, Farrah Naz Karim, P.Ananthan, Ghazemy Mahmud and B. Kaderes.
After the election, there was a proposal from the floor that Rocky be made an adviser of the NPC.
It was accepted unanimously.
(Photo: NPC newly-appointed adviser (left) and newly-elected president.)
Posted by NURAINA A SAMAD at 10:06 PM

So, the Kalikong and his machais cannot get rid of Rocky the blogsamurai? Hahahaha. In fact, I heard that there were big round of applause when Rocky mentioned in his report about the resignation of some Kalikong men from the exco last year?

Good luck Rocky! Your terms as president have raised the standard of the National Press Club and brought it closer to the corporate world as well as the government (believe it or not!).

Your tenure as the Advisor will certainly see more improvements and benefit the new President and his team.

Now can we officially ban the Kalikong and Machais from the club?

I was very disappointed rocky didnt stand for re-election. journalism is going through trying times and we need Rocky more than ever. He has inspired so many of us to fight oppression, lies, plagiarism, hypocrisy, racism. He has struggled on at a great cost, like facing an unjust suit against him. He sticks his neck out for a cause. NPC looks lost without him at the helm. Beware, evil forces are lurking. I predict NPC will be infiltrated by undesirable elements. So long NPC.

Dear Miss NAS,
Nothing mentioned by Rocky in his blog about the AGM.
I believe Rocky has woken up the journalist in M'sia from their deep slumber about the need to be truthful and impartial in their reporting.
In this present age their reporting is judge with different yardstick .Gone were the days where the 'golsstandard' of reporting is based on standard set up by authority and the news sanitised to 'ambipure' rosiness.Where readers were expected to believe whatever shove down thier throat.
Everything can be check and verify and leave no room for those who made a habit of pligarising articles to stand tall.

Congratulation to Rocky hoping that his ways of reporting would breed a new generation of journalist that the rakyat would be proud of.The kind of reporting that safeguard the rakyat from unscrupulous leaders!
TQ

agreed with nstman, clark and jug! at the rate he is going, providing great discomfort to the liars and other rotten ones (for an example, check out his latest posting on the johor crown prince, guys!!), this man rocky is a journo-blogger non-pareil. despite the lawsuit, he lugs on. no sign of fear, no indication of letting up.

the best thing about him is, he does it without any trace of malice.

i was hoping he will continue to lead the national press club but he must have other plans. the guy is also a "chess" player, ask his guys at the malay mail!

whatever that "other things" he is going to do, i wish him all the best! (Nuraina, i know you are not telling but could it be he is setting up a National Bloggers Club? that's what some of us have heard, you know).