NUR Alert out for William Yau 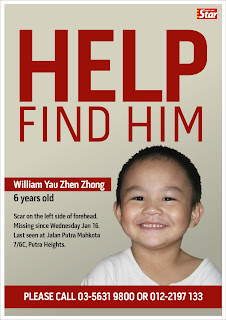 People -- we have failed Nurin,  Nadhirah and other little angels. Let's not fail 6 year-old William Yau who went missing on Wednesday (Jan 16) at Jalan Putra Mahkota 7/6c in Putra Heights.

Let's join the search for him. His distraught parents Yau Kok Kang and Goh Ying Ying are praying for his safety and safe return. The nation joins them.


William went missing after he and his family -- parents, older brother, Eric, 7 and younger sister Cindy, one  - had dinner in Puchong to celebrate Eric having been made class monitor.

According to The Star - on the way home, Yau and Goh stopped at an electrical shop in Putra Heights  to look at some washing machines.
They locked their children, including  in the car, leaving the windows open.
When they returned about 15 minutes later, William was nowhere to be seen.
According to Eric, William had gone looking for their parents because Cindy had started crying non-stop.

Of course, Yau and Goh are beside themselves for leaving their kids in the car. But you know, nothing is more punishing for your action than your child disappearing...


Help has come in a huge way for the family, with the political parties, NGOs and the community helping the police search for William.

The police has triggered NUR Alert but I'm not sure when they did that. Let's hope it was within 48 hours of the missing person report on William.

Let's hope William is in safe hands. Let's hope he will be returned safely to his family.

Let's hope too that this kind of help goes to the next missing child.

Remember, people -- Nurin's rapist and murderer is still at large.

Anonymous said...
This comment has been removed by a blog administrator.
12:52 PM

firstly would like to thank you for initiating Nur Alert.

Secondly just to share with you i am from Putra Heights, house about 5 minutes where William gone missing.

Just this morning printed out William's missing poster from Star's online page. Another great idea and initiative form Star newspaper.After distributing to office colleagues and pasting at nurseries, cafeteria and my office, i came upon the idea of pasting the poster at my Kembara's back screen.
check out the pic at my facebook.com/dradamvetshoppe

So maybe to suggest a new innovation to Nur Alert is to encourage pub;ic to print out like such posters in future and paste on their vehicles back or side windows so the missing child alert more visible in public places as where the vehicles are.

NURAINA A SAMAD said...
This comment has been removed by the author.
4:25 PM

NURAINA A SAMAD said...
This comment has been removed by the author.
4:26 PM

dr adam,
thank you for the suggestion. i hope people will be doing this.

let's pray and hope -- and with community commitment -- that little William will be found safe and sound or safely returned to his family.

Sister,first of all I cannot understand why when both parents were there,they could have easily brought the children together with them into the store.

Secondly,with criminals and rapists running wild all over the country,nobody not even adults are safe.That leaves less reason to leave the children in the car.But we can only ask,why?

Nuraina,William Yau has been missing since Jan 16th.If he was found by a good samaritan,he would have turn up at the police station within the next hour.

It is almost a week since he has gone missing.Unless the boy is held for the purpose of ransom,chances are very bleak that he may be unharmed.Let us all pray and hope for the best.

Now, now let's not anybody bring their own personal agendas into this.

Secondly, I don't know if they actually made search parties, but I hope they do, since there's always the possibility the kid met an accident while wandering around looking for his parents and is stuck somewhere.

Kak,why so many comments deleted.Are the skunks suddenly coming out from dumpsites.

anon@1:02AM: actually ..i had to delete the comments because i had published some spam. also i had accidentally deleted dr adam's comment. I then sent an email to dr adam to tell him that i had accidentally deleted his comment and if he could re-send it. meanwhile i realized that I could retrieve comments to my blog in my email so i retrieved dr adam's comment and re-published it. then dr adam responded to my earlier email and sent his comments. So i had to delete his comment that i re-published from my email.

what an explanation... hope that answers your query.

Datuk. I know you are not a lawyer but from your comment I feel you can easily put many lawyers out off their jobs. Want to take up law? You'll be a beautiful one. But you better not. The judge will melt.