A Musical Tribute To Arshad Ayub... 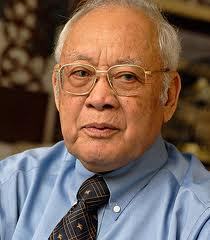 Universiti Teknologi Mara is presenting a musical -  "Tan Sri Arshad Ayub" as a tribute to his contributions as the founder of the university and in bringing it to the level it is today.

The performance will be from Jan 25  to 28  at Dewan Agung Tuanku Canselor at the UiTM main campus in Shah Alam..
Arshad, was appointed the university's (then known as ITM) first director in  1967 and is fondly remembered as  'Bapa Pembangunan ITM' .
Performing in the musical are well-known actor Tony Eusoff as well as  UiTM lecturers and students.
It is directed by Mazlan Tahir, an arts activist and lecturer at the Film, Theatre and Animation Faculty. .
The musical depicts Arshad's journey from the time he was a 16 year-old in Muar, Johor during the Japanese occupation to his appintment as ITM director. It follows his trials and tribulations.

Many young Malay professionals may not know who Arshad Ayub is. They should take the trouble to know the guy because if not for Arshad they might become the professionals that they are today

Has he passed on? Can't recall reaaing about it! Met him when we were bumiputra shopping for the company we were about to list. Flamboyant, was my impression and well spoken.

Nuraina,were you gals at the 1/12 rally.If not you guys/gals missed an opportunity to witnessed history in the making.Looking at the huge turnout,do you still have any doubt's that Umno/BN is on the way out.

The opposition has the crowd at 450,00 and the yesmen,mata mata has it at 45,000,miles apart.But of course even a moron would know that such a huge crowd must be at least 200,000 and up.So commonsense tells us that we have to take the opposition's numbers at 450,000 with a grain of salt.

It is time to discard the corrupted apes for the monkeys.At least we know that there will be a rainbow after the rain.And a real colorful one to.Maybe next time you might decide to turn up,luv.Bye.

rocky: you missed the word "not":

"They should take the trouble to know the guy because if not for Arshad they might NOT become the professionals that they are today.

nope...too old for these things.
five years ago, I waa at the 1st Bersih, and the other "walks" -- freedom walk, lawyers walks etc..

Nuraina,have you watch the university forum speaker ridiculed the student for asking to many questions.Like telling her "the difference between you and me is a degree and an O levels" and lots more of shit too.It is all over u-tube.This is the product of ignorant Umeeno.Hehehe.

Nuraina,listen,listen and listen.Let me talk,let me talk and let me talk.How can an idiot such as this Sharifah be an educator.And being with "degreed" to the young lady's O'levels.

However confrontional and provacative the young lady is,it was her turn to speak on the floor.Sharifah,being a forum speaker or an educator should be able to have the experience and disclipline to handle such situations.Instead she lost her cool and went on belittling the young student.What a shame such "degreed" graduates our educational system keeps churning out.

Sister,do you happen to know the moderator of the forum at UUM Sharifah Zohra Jabeen.If you do I need you to do me a favor.She was ridiculing the student Bawani for asking to many questions which she doesn't like to hear.

Like telling the student that the difference between them is a degree and an O-level.Can you please ask her where she got her degree.Maybe from Iran or Eygpt.Please tell her that to do what she did to making a fool out of her ownself,all she needs is to be able to read abc or c,a,t is a cat.

manmanlai: so sorry...i have no idea who sharifah zohrah is.

like two mad politicians -- one from BN, the other from Pakatan.