Why Such Hatred For The Jalur Gemilang? 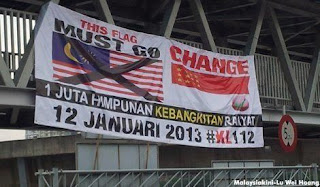 Did the supporters of the Jan 12 rally put up this banner calling for the Malaysian flag to be replaced by another?
If they did, they've got another think coming.

Trying your damnest to bring down the government through lawful and democratic means is one thing...heck, some people go overboard, spewing vile  and vitriol. We close one eye.

But trying to have the national flag replaced....that is going overboard.

This banner was seen along Jalan Bangsar.

Kalau berani, I dare you to come forward and wave smeared and defaced Malaysian flags...
Posted by NURAINA A SAMAD at 7:10 PM

Are you sure this isn't the work of your bosses?

Maybe this is done by parties to promote hatred and rally support for the Umno/BN.Who knows?Because the finger pointing will be to the opposition PR.Hahaha.

In the US,regardless of their political persuasion,Americans will always respect their Stars and Stripes.The Jalur Gemilang has been flapping proudly over our balcony since hari Merdeka 2 years ago. It was fixed there by my husband, an American. If a foreigner can respect the Jalur Gemilang, what does that show about the 'whats-his-face' who showed such disrespect for the Jalur Gemilang? Maybe he should be towed out to sea in a leaky boat along with others like him. Good riddance to bad rubbish!

Sometimes there are sick people who comes up wiyh crazy ideas.This crazies was never taught by their parents to respect their own country,parents and fellow citizens.

We have politicians who stirred up racial and religious sentiments, among the masses for their own political gains.They try to pitched the various races against each another.

Next in line are the bigots from PKR,the ugly clones of Umno led by the ass loving Anwar and his alledged lover's hubby Azmin.

The DAP,PAS and MIC are behind,with MIC the least vocal in the political bigotry scene.

Play racial,religious and gutter politics as much as they like.But it is a real shame and disgrace,for these pariahs to fu*ked around with the "Jalur Gemilang".

Whoever hang the defaced flag or have any problems with the Malaysian flag should take their families,pack up and move to Palestine.Go settle down there and have a good life.Thank you and may Allah bless you all.And hope the Israelis would love you guys as much as they love their much hated stepchildren over there.

the gaffe guy who knows said...

Even a child can figure it out.Umno Bangsar,on orders from its political bosses have ordered their thugs to hang up the descreated flag and blamed it on Nurul's PKR.They have to get something done to discredit the opposition,in order to help Nong Chik.Or else Nong Chik will fall flat on his back and smell Nurul's boots on election night.

So who do you think is to be blamed for such a disrespectful degrading act of shame.

Umno/BN instigators or perpetrators if caught will be given a get out of jail free pass.

PR supporters and trouble makers when caught might get beaten blue and black or might even succumb to their injuries in lockup.

So we have to come to a conclusion that it is more likely instigators from Umno/BN than from the opposition PR.

the gaffe guy who knows said...

Surely there must be cctv in the stadiums and on the surrounding grounds.The PDRM and SB boys should have no problem identifying the culprits.If no action is taken then we have to assume that it is an inside job.

Errr So you know..

The Photo is Set Up by UMNO Supporters to make the Opposition Look Bad!!

Calling for a change of flag or descretion of the flag is unpatriotic.

How about mass corruption?The illegal outflow of the ringgit,has hurt the economy and has sent prices of imported goods soaring,due to the lower ringgit.More ringgit flowing out than coming in has the ringgit lower among our trading partners.The middle and lower income has seen their living standards come down due to the soaring prices of goods,as inflation has run out of control.

Importing of illegals by politicians to balance the power in Sabah.Now due to over excess of illegals,legals and illegals are running wild all over the country.Law abiding and loving citizens cannot even walk the streets in their own neighbourhoods feeling safe.Why?Because illegals and now legals are running around robbing every vulnerable honest people they have in their sights.Is this unpatriotic or treason?

The purchase of two submarines that cannot dive resulting in RM 550 million in illegal commissione and a pretty Mongolian mother being C4ed.Treason,no?

Bangsar is Raja Nong Chik's territory.He is the "Taiko" there.Nothing happens without the taiko's okay this and okay that.If anything that happens without his okay,that means he is an impostor,a real lousy sleepyhead chap.

Nice try, "if they did"! The banner looks expensive, but ok it must make sense in Bangsar. Must be budget, that will probably cost Hishamuddin Rais his whole year allowance.

First, the systematic name-calling Perhimpunan Shamsidar, followed by some half-hearted police reports nationwide. If time permit but need to be done last minute for good dramatic effect, discovery of cache of blunt objects at strategic points all over KL with bundles of fresh multi-colored T-shirts, posters etc. Saturday, expects "hordes" to lead incidents of barrier-breaking, crowd charging etc Home-made explosions like the one in Jalan Duta Courts might be too risky as the crowd is too compact.

Smoking-gun tactics, that's what the CIA manual said if you need for sunday morning headlines and photos with common theme systematically "CHAOS".

Come on lah! BN had their days with Himpunan Sejuta Belia and 50-year Celebrations. Give the other side a chance to express themselves and patriotism for Malaysia.

Did supporters of the Jan 12 rally put up this banner calling for the Malaysian flag to be replaced.

It is not the hatred for the Jalur Gembilang.It is trying to stir up animosity among the people.

And with the opposition PR on a roll,and ready to march into Putrajaya,they have no reason to create trouble.The last thing they want is to delay the GE.

Commonsense will tell us who are the culprits.

My son just left to further his study in Canada last Sept. first thing he asked me after he settled down in his dorm was for a big Jalur Gemilang so he can hang it by the window so that everyone knows where he comes from. ( and most likely so he wont forget too )

the gaffe guy who know's said...

Nuraina,I have analysed all the comments made on your blog,the past half a dozen articles.

This is the unbias result om my analysis.

1.Pro-PR supporters overwhelmed Pro-Umno/BN supporters by 3-1.All this means is that PR will be the next federal gomen.Do I hit the nail on the head?

It is an open secret that anti PR people was involved in the banner incident.It is not a cheap banner,and only the very rich and corrupted could afford to throw this type of money around.And what better type of people fits this category?Of course the corrupted Umnoputras and their cronies.Hahaha.

Everything blame UMNO, I think Hadi Awang, Nizar , Anwar and all the rest of Pakatan stooges must be UMNO's agents too lah. Considering how stupid they are, just like with this flag stunt and Allah problem and that Death Railway ridiculous RM207 billion fairy tale.

Promote hatred?You kidding or what?You Pakatan incite hatred every chance you get.

Sister,now I know why the Jalur Gemilang's banner was descretated.The Umno must have heard of Bank Islam's analysis of Umeeno getting the broomstick,so they are going to cause hatred and aminosity among the Malays.

Do not worry that Umeeno is gone, for better times are ahead.PR's first piority is to clean the streets of criminals.All illegals turned legals by Umeeno will be rounded up and sent back to Indonesia and the Philippines.

There will be minimal corruption at the federal and state gomens.Kamunting hotel will be overcrowded with Umeenoputras and cronies.And you will be sure that the streets are safer than before.

"Soldiers" switching allegiances like pondans changing their pads and underwears.This country must have a law how to skewer frogs,or else soon the frogs will be overflowing the ponds eating up all our beloved fishes.

By the way were you and your collegues there to say farewell to the ruling regime.

Nuraina,I was looking high and low for you at 112 rally,so that we can chit chat.But nowhere can you be found.Maybe next time lah.

I love our jalur gemilang. Nobody can replace it!

This is not even spoken of or about in opposition arena. ITs something that can be done only by your friends in UMNO. But of course you'd rather pretend not to know that la. Understand....

oh NUr.I think you are a BN supporter the way you write your article. As the saying goes, when the needle did not pin you you would not feel the pain.Pls write without fear or favour. Be neutral, then the rakyat will read your report. To change our strong support from an opposition to a gov.then the gov need to be fair and meritrocacy be practised