We Are All Living In Fear... 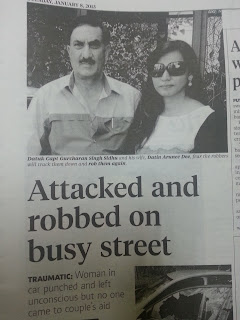 The NST report is HERE.

This is all so sad that it is the same old story over and over again... and this kind of crime has happened in many locations around the Klang Valley, notably near or at junctions with traffic lights.

In this incident, Capt Gurcharan Singh Sidhu, 63, and his wife Datin Arunee Dee, 38, were in their car at a traffic- light junction in Jalan P. Ramlee on Sunday evening when they were attacked and robbed by two men on a motorcycle.
According to the report, the pillion rider smashed the front passenger window with a metal object and tried to grab Arunee's handbag. She put up a fight, but was knocked unconscious by a punch to her face. The pillion rider then grabbed the bag and the two escaped in heavy traffic.
Gurcharan said he was too stunned to react.
"My wife was unconscious. She was bleeding from her arms and legs after the window's shattered glass cut her," he told the New Straits Times yesterday.
"Motorists behind us kept honking thinking I was purposely holding up traffic.
"No one came to our aid. They were probably afraid for their own safety."


You can read the rest of the story on the link I have made above.

Here's the thing -- you and I know that this is not the first such horrific incident. You and I know someone who has been robbed viciously like this.

I know of two people -- my youngest sister, Nina and her daughter, Sara. Worse, it happened right in front of the gate of their house.

Why is this still happening?
Why are these criminals still going about their merry way robbing and hurting people at traffic lights, at their homes and everywhere?
Why are they still so bold?

Let me tell you why -- because THEY CAN GET AWAY WITH  IT and NOBODY IS STOPPING THEM OR CAN STOP THEM ..or WANT TO STOP THEM.
I'll be honest -- I am living in fear. My family is living in fear.  And we are not the only ones.
Not only residents of housing estates fear of being attacked anytime, anyday.
People...people driving in their cars..people walking...
You fear when you arrive at the gate of your home -- if anyone has been following you or lying in wait.
You are just so fearful.

In Section 16, PJ where my sister and her family live, occupants of nearly every household along the surrounding roads, have been attacked in one form or another.

Police reports have been made..and yet...the attacks went on unabated.
I'd like to ask the police this -- what are our men in blue doing to prevent/deter these criminals from their vicious spree?
I mean, really really seriously deterring them.....
Yes yes yes...they've bought more motorcycles for policemen to patrol the streets...Visibility does help to reduce crime.
But...then, these vicious attacks have continued and they happen when the policemen are not around.
Let me ask -- how many of these criminals have been nabbed?
You feel the threat of attack near or at your home, you feel unsafe outside your home. You feel unsafe anywhere. No place is safe ...
Just going out in your car is no longer safe. You worry when you arrive at traffic lights. You worry when you cross the road..

Although I did understand why residents felt the need to block the exits and entrances of their neighbourhood roads, I had thought that there were other security options and felt that the police should not happily approve of this kind of measure.
After my sister and my niece were viciously attacked right in front of their home, I threw all my scepticisms aside ...
Still...I feel that the police could do better and more. think outside adn beyond the box.

For instance, in Section 16, PJ..alarm bells should have rung strong and hard given the regularity of attacks and robbery -- some in broad daylight..

I despair looking at out neighbourhoods all guarded.
This is not normal at all.
This sense of fear is not normal.
These are critical times. Dangerous times.

Bring back the Police which the gangsters and people fear. Don't let the Pakatan lawyers defend these criminals.

Whack them blue and black, instil fear in these criminals, not a slap on the wrist type.

But will the Pakatan fools agree?

A GOOD MAN DOES NOTHING.

There are 1.5 million civil servant in Malaysia. Percentage wise, it is far more than those in heavily populated countries like Japan, Germany, France, Indonesia, Australian and so forth. What are these people doings in their respective departments. Some of my cousins in PTD at grade 41 -48 have been attending courses after courses almost 3-4 months in a year. The balances of 8-9 months in a year they seem to be doing nothing much except becoming fixed deposit voters BN. Can`t we convert and retrain 0.5million of them into the police force for rakyats` protection? So that they can have real `works`.

First why is it happening here and not in Singapore.

A pigeon with a pea brain can figure it out.Corruption,corruption,cronism,cronism and many more corruptions and cronism to come.All these sick mental diseases have rotted from the head down to the tail.

No incentives to be productive,thus eliminating whatever competition there is existing in the public institutions.Only cronies get promoted.That is the reason nobody wants to excell in their work,to impress who.Ball carriers are the ones getting rewarded.

We should blame the NGOs,the Bar Council, the politicians (government as well as opposition), SUHAKAM and Dollah Badawi who treated our police force as punch bags so much so that the personel are afraid to act. The problem is currently is compounded by the weak Home Affairs Minister. We were not in this situation during Tan Sri Rahim Nor and his predecessors as IGPs.

Why are these criminals going around on a robbing spree?

Well,first of all the Mat Rempits are going on a robbing spree.And do you know who the mat rempits answered to and who are their bosses.This are the mat rempits that always show up at PR ceramahs to create trouble.They have a licence to run wild.And when the illegals saw that these thugs are off bounds from the mata mata they joined in the chorus.Hey,can we blame the illegals.No,we blamed the gomen.Hehehe.

If criminals are running wild like stray mongrels,something must be very seriously wrong.There is a serious structural problem.An complete overhaul is needed in the top of the law enforcement department.Heads must roll,no second guessing.The PM and HM must take stern action,or else havoc and chaos will ensure.No body is safe.Even the ministers have dozens of bodyguards guarding their offsprings.

Anon@7:48PM: you know..it makes me think -- those pakatan people -- they have said nothing about how to reduce crime rate.

All they do is attack attack attack..and you are right -- they are the ones who have been "protecting" and "defending" criminals.

it is a pity znd unfortunate, to my mind, that the police and the MACC had to "soften" because of the hoo-ha these Pakatan people had whipped up.

All those human rights pretenders.

Please support Safer Malaysia, a non-political community project offering Solutions and Help to the Govt to lessen crime. Memorandums to that effect was sent to the Govenment, but sadly todate, the Govt has not taken up the offer. Please visit www.safermalaysia.com