Citizens for NURIN Alert -- The Next Level 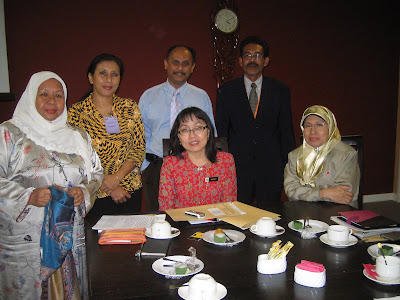 Citizens for NURIN Alert has been pushing for the alert system - modelled on the highly successful AMBER Alert in the US -- to be introduced to help in the search and rescue of missing children.
The suggestion was made following the brutal murder of 8 year-old Nurin Jazlin Jazimin whose crumpled body was found stuffed in a sports bag on September 17, 28 days after she had gone missing.
There was public outrage and outcry following the discovery of her body.
Today's discussions which lasted over an hour was held at the JKM premises at Jalan Raja Laut. With Meme were advisor to the Women, Family and Community Development Ministry Dato' Shamsiah Ad. Rahman, Nor Amni Yusoff (Director of the Department's Children Division) and Abdullah Hanafi of the Department's Legal & Advocation Division.
Minister Datuk Seri Shahrizat Abdul Jalil had directed the department to meet CFNA for a briefing on NURIN Alert and how it could be incorporated into the policy.
Indeed, it was a fruitful meeting, after which it was agreed that a technical committee be set up to look further into the plan.
The Child Protection Policy is also being drafted following Nurin's brutal murder.
Women, Family and Community Development Minister Datuk Seri Shahrizat Abdul Jalil will submit the draft of the policy to the Cabinet for approval.
Shahrizat has shown keen interest in making NURIN Alert part of the Child Protection Policy.

AMBER Alert has been highly successful in the safe return of missing children in the shortest possible time.
(Here, I'd like to again thank Farina in Orange, California of Princessjournals who was the first to mention AMBER Alert in my posting about Nurin.)

So far, Citizens for NURIN Alert has gained incredible support from a cross section of Malaysians, including the corporate sector and a unit of the police force.

And by the way, Nurin's killer/killers are still at large.
According to Deputy Internal Security Minister Johari Baharum police are investigating and are following set procedures.

(I don't know what he means but if it were me uttering that, it would be my way of telling everyone to just butt out and let me do my job in my time and in the way I see fit.)

PHOTO: Standing from left - Dato Shamsiah, Nuraina, Jasni and Encik Abdullah.
Seated -- Meme and Nor Amni. (Pix by Hanizah)
Posted by NURAINA A SAMAD at 10:16 PM

Finally you guys have taken this initiative to the next level. I never had any doubt about your commitment to the Nurin Alert project. I was told hundreds have "registered" themselves with the Nurin Alert "centre" even before it has been created. Some corporate names.

I hope Shahrizat stays the course on this one, too.

Thank u, all. You guys know the road to the end will be long and winding.

Nurin will be the angel who will save hundreds of missing children via NURIN ALERT.

I still feel the pain in my heart when I think of Nurin and what she had to suffer for 28 days.

Nurin did not die in vain and her memory will be kept alive forever.

Despite all of us living in a unsafe environment, it is good to know that there are still many caring people like you, Tembam, Nuraina and the rest pushing for Nurin Alert.

Have a great weekend !

I just wanted to say that I am glad something is being done, at long last! Too many children have gone missing, have ended up raped, battered, sodomised, brutalised, killed and stuffed somewhere...

Maybe Nurin Alert will be an end to all this...Or at least, remind everyone to play their role...

You have my admiration for your dogged determination to bring Nurin Alert to full fruition. You did not just blog about it, you followed through with decisive and concrete action coupled with real commitment and energy. This is a fine example of walking the talk.

It must be heartening for you and your fellow Nurin Alert proponents to see how far the project has progressed.

Protect the innocent children, we must!

well initiated project.may the light of clarity and blessing be upon all those care to make this project work.god bless.....

Thank you kak enah for making NURIN Alert a reality.

Ena, keep pushing hard that this if approved is SUSTAINED. We are so familiar with some initiatives that comes with a lot of fanfare and government spin and die a natural death when it is owned by the Government. Keep them focused. Dont ever give in to Government expediencies, which have today been crafted into a fine art. Expect you and Jasni to breathe down the neck of identified government reps. My pessimism arises from the fact that Sharizat is still delegating. It would be a different thing if she herself takes FULL OWNERSHIP.

I can hear the big voice of your Honourable Prime Minister amplifed by a powerful sound system delivering a JFK ...

Thats typically how he would bungle the punch line.

We do play a role in society with the Government ...

Nuraina, Sorry, which one is you in the photo?

dharan: Standing second from left. In yellow and black top.

Ok & thanks (now kalau jumpa tengah jalan I know its you!) and the names are now mentioned in the write-up; I'm sure they were not there before? Salam.

Kak Ena, i feel so proud of u, Tembam and the rest of the committee for pursuing this course. I feel even prouder to be in the 'loop'. ;) Well done Bloggers!

This will be one of the most positive things that come out of this horrendous tragedy.

My heart still whimpers whenever I think of arwah Nurin Jazlin (Al-Fatihah!).