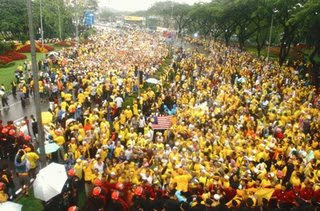 Yes. Indeed. Like never before.
All thousands (some say 40,000) of them marched, emerging from wherever they could, braving the heavy afternoon downpour, the FRU's water cannons and tear gas.
There were already FRUs at strategic points in several parts of the city in the morning. And at Dataran Merdeka, the FRUs formed a barricade, preventing anyone from entering.
Dataran Merdeka was to be the starting point (at 3pm) for the Yellow March -- the peaceful march for electoral reforms, for fair and clean elections.

At Masjid Jamek LRT station, the police warned the crowd to disperse.

It was a Saturday afternoon in KL many will never forget.

"The dawn of a new day", whispered a very tired but gratified Haris Ibrahim (human rights laywer, social activist, blog-owner of People's Parliament and chief initiator of the Bangsa Malaysia movement) when we met for drinks later in the evening at BSC's Chilli's. He was among friends -- Rocky, Stephen F, Shar, Tony Yew, Eric Woon, Wahti Maidin, Michelle G, Sharmila and a few others.

And yes, come hell or high water, they marched.

The BERSIH memorandum was submitted to the Istana about 4pm to the loud cheers of the accompanying crowd.

And of course, don't miss Haris Ibrahim's take on 10-Eleven.

And the Al-Jazeera's article on the Yellow March is here.

And if you have not seen the Al-Jazeera news coverage on this, go to Marina Mahathir's, here.
Posted by NURAINA A SAMAD at 2:48 AM

from masjid jamek....you really can't proceed to dataran, the FRU trucks were lining from the traffic light and firing water canon and tear gas....

the LRT did not stop at masjid jamek and pasar seni station....but in all, it was a good turnout despite the black out in today's newspaper...

This, like the Bar Council march, is an exemplary gathering demonstrating the possibility of peaceful expression of societal preference through mass, individual turnout.

Preference expressions need not be limited to just official referenda, or electoral votes as some members of the present government's cabinet may have opined; a people can validly indicate them through gatherings, support for such gatherings and submissions of signed memoranda.

Syabas to all those who participated!

Nuraina,
If only there was no roadblock and stoppages by th epolice, more than 100,000 people would walk peacefully to the Istana. Even the 40,000 who attended scared away the shit of the current PM that was why they resorted to the highhanded ways of the police.
Vravo to all those who participated. Malaysia owe you one.

As a journalist of more than 20 years and the current adviser of the National Press Club, I would like to register my concern with a report of police "attacking" a number of journalists who were covering the Yellow March yesterday. The police should investigate the claims. Zam, our Info Minister, should condemn this brutality, and should order an investigation into the claims made by those journalists.

Other than that, I join others in congratulating the organisers of the march, those who took part in the walk, and those who are supportive of it. To those caught by the teargas and water canons, Salute!

Please go to Malaysiakita for photos links. Scroll down to "Historic Moments" below the blue ad. Thank you.

Just want to say that I think muka Pak Lah and goons were well and truly slapped on 10/11.

If he could mobilized his uniformed goons to terrorized peaceful citizens execising their democratic rights, he could as easily allowed the march and used those idiots for crowd control.

Imagine the brownies he could have earned. Instead he got slapped yellow. :D

Posted this on Rocky's blog:
When I read about Bersih's yellow campaign, the first thing that struck my mind was; if I was the PM, I'd send my BN teams there to rally. PM said in recent GA that he looks forward Election day, where the Rakyat can choose and vote them, again. If he had sent BN members there, it would show to the Rakyat and the entire world;

that they are NOT AFRAID OF THE ELECTION

if the Rakyat wants BN, they will get BN, no matter what through clean elections

that this is truly a democratic country, with its Rakyat exercising their constitutional right to assemble peacefully

and most importantly, it will restore public's opinions on election issues, restoring confidence in our voting system, and giving BN the desperately needed boost of their already poor image

Unfortunately, NO, it went otherwise, and this made the Rakyat believed that there was something WRONG with the voting system, confirming all the reasons why the Oppositions and NGO has been rallying all these while. So, it was not a very smart move from them.

As a Malaysian, regarless of my race or my religion, I have a right to:

Freedom of speech or blog (well, that too is under threat by the dumb Noraini using ISA)

and most importantly, my right to VOTE (and it MUST be via a CLEAN election system), but with the protest claiming it was an illegal gathering, tear gas & water gun sprayed and people beaten up, it only proves that my Government ALLOWS me to vote, allows an election but wont promise it will be clean.

So, what's left of my rights? At the end of the day, it only allows me to THINK (the only thing they could not control) and VOTE (it would not make any difference as it will be manipulated).

Crime is high and prices of many things are high, and will continue to be high.

As for those who went and supported last Saturday, I have only admiration and I salute them. It doesnt matter if the Oppositions were there, we are asking, calling, requesting & begging for FAIR ELECTION, so how can this be wrong? They were acting on behalf of millions of people who cannot be there, so how can this be wrong? AND, 40,000 people there gathering peacefully standing up against the Police and abuse, all for the fight on behalf of millions of people, for their rights, for yours and mine.

I never voted before, but I will now for the next election.

i am so proud of and so inspired by those who were there at dataran merdeka on 10-eleven. i wish so much i was back home to join in.

god bless you all and thank you thank you from the bottom of my heart for showing me that we are willing to stand up and demand for change, even though armed with only silent resilience and determination!

i salute you all..

Some people on the other blogs said that "they did nothing good but stopped traffic for a few hours".

So disappointing that some people do not see the urgency and the need to stand up for what is right.

Like my 'darling' said, "I did not dodge police, get tear gassed and risk arrest just to stop traffic."

Yes, it was more than that. For those stuck in traffic, let me inform you that traffic was not due to the BERSIH march. It was due to the many many roadblocks and road closures done by the police since the night before to arrest people in yellow.

i'm terribly,terribly proud of u guys and gals