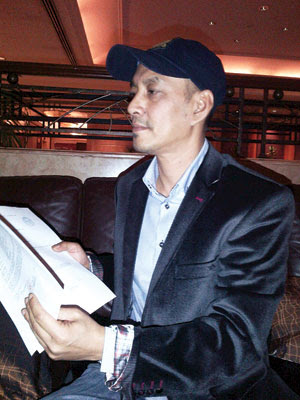 ...never mind, your choice of adjective.

His name is Kamal Ashnawi (in picture). He is from Perak and he claims to have Euro 5 TRILLION (gasp) (savings) which amounts to RM20 trillion.

Now -- just on that line...can you believe him? I mean DUUH.

He was interviewed by Mingguan Malaysia. He showed the reporters copies of bank statements from HSBC in London to back his claim of having the dough.
So, that would make him a "trillionaire".... far far richer than Forbes' richest people on earth. Man, he's richer than Malaysia.... He's like a very rich country.

Kamal said that he is the president and chief executive officer of Sierra Petroleum (M) Sdn Bhd.

In 2005, he claimed to have proposed an oil refinery project in Kedah but that did not fall through and, according to him, after that, some people spread tall tales about him.

That's why he decided to talk to the newspaper. Here's where he lost me..

Kamal said he is now offering to make mega investments in three projects in Perlis, Johor and Kelantan soon.

The business, he added, would be handed over to SAS Group, a group of former students of Sekolah Menengah Sains Alam Shah.

Kamal said he will be staying in Hong Kong in March with his family before going to Indonesia.

Now, get this : his wealth was derived from the royal heritage through the accounts of the Combined International Collateral Global Debt Facility in 1875.

Here's another one : he also claimed that he is a royal descendant from Java, Indonesia with the name Raden Mas Prabhu Gusti Agung Ki Asmoro Wijoyo and was expected to be crowned as King of Indonesia in the next few years.

Sounds so bizarre and far-fetched to me. You may laugh but there are enough people who believe in him...

I've been told by a friend in London that everyone who knew him say that he's a xxxxxx .....yep, just as I thought.

The Star has the story as well

(Photo from Mingguan Malaysia)
Posted by NURAINA A SAMAD at 5:45 PM

That's half the truth to a Malaysian's wealth! There are more richer person than him! Please get your facts right. I deplore your reporting. Sorry I cannot accept this facts. The actual person who is the most wealthiest person on earth really comes from Malaysia. And he is non other than AYAH PIN! He owns heaven and earth, he created religions, he's so down to earth till he sits in a lowly coffee shop without any T shirt wearing just seluar pendik, and berefooted sipping simple teh tarik. Thats god to me . And I think he's gonna be the king of the whole world. Anyone buys this crap? Any conman can says anything to one's wealth, but why after these years his name does not appears in any of those top ten in the whole world? Or is he another one of those "Arab" guy who says he is a billionaire who married a local a created a ruckus a few years back then. Radin this, Radin that, proclaiming fancy title from that indon land, what do you think ? We are living in a fairy tale land bro? while your'e at it in MALAYSIA why dont you contribute .DAMN IT! I.E if your'e so damn rich. Why dont you contribute to the well beings of your fellow MALAYSIAN! You korik the business from Malaysia but I have never seen your name as being entreprenuer.Disgusting!

the photo you are showing is not me!
he looks like me but he is not me!

Nuraina,never heard about this Kamal Ashnawi before.Funny man David Letterman will be like a miny pauper compared to this nut.Maybe Mingguan Malaysia needed this story to get their sales jump started.

wow...that means you must be proud of Ananda Krishnan whose ancestors started from the rubber tapping in the Malay Peninsular at that time or Robert Kok, whose ancestors started from working in the tin mines.So , the decendants of Malays must be very poor eventhough the whose peninsular used to belong to our ancestors....Be smart...I wonder why there's no statement made by HSBC or the top guns from the governments if the statement is not true except from ur own non credential person.
Know your ownself before talking about others.Surf thru the Sierra Petroleum, even the senior vice president, Dr. David Chang, a committee for the US Federal Reserves and also a Chairman of the International Chinese Association had personally verified it with HSBC London.
Dont think youre so great when you dont really know anything about the high level financing.If you so embraced about the Arab, then you tell me, where were the great Arab Warrior when The Japanese invaded Malaya or when the British occupied our land.Dont you think that our warrior such as Mat Kilau, Datuk Bahaman and others had sacrifice their lives for their decendents.So dont ever make a fool of your own people when you dont really know the truth.

Actually there are quite a few of these 'naires around. But this is the first trillionaire. I met one billionaire once and we drove in his merc and therein asked me if he could loan me 50 bucks for petrol. And yes i had to pay the toll too. Another 'naire I was with: i had to pay for the teh tarik we downed in a mamak shop.

To be fair, i am a naire myself. Rupiahs, that is. Even my maid i am paying in huge amounts: a million.

Hehe. Your highness grand majestic Emperir Ashnawi. There' s a sucker born every minute. With the internet, it just gets multipkied several times over.

Bernama was the first to interview this guy after 2005.

they actually have no intention of conning people but lost in the delusion of grandeur their mind created..

there's a lot of other cases related to GD in Malaysia (including the rich lebanese guy and selfproclaimed sultan melaka).. Try to google it you will find a lot of articles regarding to dis..

actually we can't even be sure if his name is kamal ashnawi...

Aiseyman, why in the first place BERNAMA or any of those mainstream media wasted their precious column interviewing this man?

THey should have reserve the columns for more worthy reporting..

On another note, I bet this guy used to be room/house mates with Elly, who claims that he had donated more than a billion ringgit to the Makna Foundation..

My sympathy to Dato' Farid Ariffin for having his full trust on that bugger, if you know what I mean, sister...

apart from that,SAS was also the school of tuanku kamal "trilionaire" ashnawi,the first ever heard maharaja of indon.

Ena,
He is a confirm case of hypomania.
For all his delusions of grandiose, this fella Kamal Ashnawi is harmless.
Unlike the guy whose delusions of grandiose is to be the PM of Malaysia.
I had personal experience with close friends suffering from hypomania/manic depression.
Strongly recommend Dr Fathhil Man - ex head phsychiatrist of HUKM.
One can find his private practice in Ampang Park if he has not retired.
wak

mingguan should not in the first place ever entertained this conman. Please concentrate in publishing serious matter relating to Malays in Malaysia. Leave the stupid story like this to National Enquirer etc.

Dato
A product of Skolah Menengah Alam Shah.Bravo to the resedential school.

Among the symptoms of this disorder;

- Have excessive feelings of self-importance

- Be preoccupied with fantasies of success, power, beauty, intelligence, or ideal love

- Have unreasonable expectations of favorable treatment

- Disregard the feelings of others, and have little ability to feel empathy

In other words, he is a STARK RAVING LUNATIC.

Trust me, the very presence of reporters around him would certainly worsen his mental state, as it'll boost his illusions of grandeur.

He needs to go a hospital, where they would run 80,000 volts of electric shock through his thick skull, maybe that will knock some sense into him.

Next story please....so that this one can be in archive...

Agree . This person should be just ignored. During my working days, we met quite a number like him , asking for aour help to bring back tneir wealth stored overseas. Some with unaccepted figues like hunderd thousands of rm1000 notes. ( far exceeded the total of printed notes). Angan2 mat jenin. Newspapers should not wate their time on these people. Kesian kepada close relatives mereka. Jadi bahan gelak

"actually we can't even be sure if his name is kamal ashnawi..."
Maybe his name is Kamal Hisham Jaafar..