The Sting On Sarawak's Taib...


Early last week, a video "Inside Malaysia's Shadow State" went viral.
It is supposedly an expose of corruption and shady dealings involving Sarawak chief minister Taib Mahmud and his family.

It's a short clip of interviews by a Mat salleh "investigator" with a lawyer, a businessmen and two sisters Norlia and Fatimah (daughters of former Sarawak chief chief minister and governor Rahman Yaakub).

The four were talking to this Mat Salleh who was posing as a potential investor.
Well, you can call it a sting operation.

I'm not sure if a sting is like that. Never seen a real one, Only those on TV shows.

Alvin, the lawyer, made references to Singapore as a place where you can dump your money and no questions asked.

The sisters -- Taib's cousins -- spoke of how they can get away with a shady land deal.

Hmm.. I remember years ago Taib and their father (who is Taib's uncle) were embroiled in a bitter power struggle in Sarawak. That episode is known as The 1987 Ming Court Affair. There was a lot of bad blood. In 2008, on Rahman's 80th birthday, the two reportedly patched things up, mended the fence, let bygones be bygones.

Perhaps both of them did...but Rahman's daughters may still find it hard to forgive and forget.

Anyway, the video was uploaded in so many sites, and happily circulated by the opposition party supporters.

The Mole has the story.

The Malay Mail carried it on page one and included Taib's response -- he said that he was being framed. 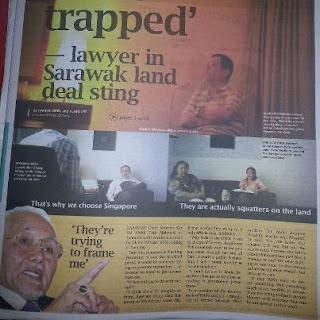 And Singapore responded as well, denying the allegations made in the video.

Taib also issued a reminder to people, to not easily trust anyone claiming to act as agents for purchasing Sarawak land.
Anybody can say or claim they are agents, but people should know that it is not necessarily true, he said.
"People should be careful not to be drowned into this kind of lies, and believing it that they are my agents...some people can say that they are my agents, they can act as my agent but it doesn't mean it is true.

And a police report has been lodged.

For me, it's so easy not to believe everything I see or hear, including this video clip. I mean, where is the proof? It's just of people making allegations, two of whom are Taib's cousins and whose wounds, I suspect, have probably not healed.
And coming at a time when we are going to have a general election. Reminds of of those "damning' reports of the excesses of Taib and his family circulated online before the Sarawak state elections.

It turned out that the video is the work of Global Witness - an organisation posing as one that's doing good things for democracy... Bullshit.


And, yeah, was it really a sting operation or just a hatchet job..we all know that they all want to get Taib and bring him down.

You can choose to believe everything that people, like those Global Witness operatives, are shoving  down your throat. People don'st stop to think or ask questions.
They lap it all up...

One thing you can get angry is the remark by one of the sisters that the Dayak are squatters on government land. Even then, that could be in the script.

As a dayak and Sarawkian, there is nothing new in the video. Everybody in Sarawak know about Taib's corruption. Its a question of is it relevant or not to one.

When is the Malaysian Election Date?

Where is the Prime Minister of Malaysia?

If Taib thinks he is framed and he knows who the person is who frames him then, he should challenge that person in court.

Anon@9:34AM: I have many friends in Sarawak, including Dayak -- they think that Taib has done a lot for Sarawak.
They know he is rich...but whether he is corrupt, they don't know except that the opposition and some NGOs insist that he is.

I am Dayak. Maybe your Dayak friends are all those benefit from scrumbs under Taib's table. What had Taib done to help Dayak? What being said in the video is exactly what happened to my people (i might be wrong because who knows your Dayak friends are larger in number compared to MY Dayak community). If Taib is doing much to the people of Sarawak, why is that everything from toilet seat to mega building have taib's name on it?