Here's the second and final part of the NST interview with former Finance Minister Daim Zainuddin headlined "We Should Not Waste Time With Anwar, His Time Had Come and Gone".

Back then in the 80s, Daim and Anwar were the king's men, the Team A (versus Musa Hitam's Team B). Here's a quote by Daim in NST's Up Close and Personal segment : 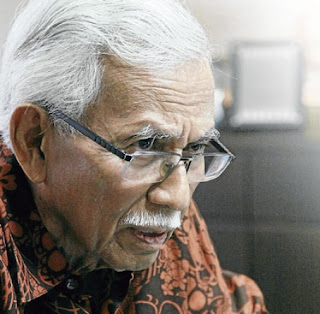 "Really, we should not waste time with Anwar. He is past his use-by date. His time had come and gone.
I also think that you should not give so much news space to him. That's what he likes. He does not like to be ignored, so ignore him I say. He should be left to be the entertainer that he is, dancing and singing at ceramahs. As I said his time is gone, like a burung punggok merindukan bulan, (a dog barking at the caravans, and the caravans have moved on)."

The interview that was published today:


THIS is the final part of the interview with former finance minister Tun Daim Zainuddin, who helped the Malaysian economy survive the 1997 Asian financial crisis.

Without mincing words, Daim discussed with New Straits Times journalists A. JALIL HAMID, RASHID YUSOF and HARIZ MOHD and photographer ZAHARI ZAKARIA the key events during the "Mahathir Years", including the events which led to Datuk Seri Anwar Ibrahim's downfall.

Question: Media reports suggested at the time of your departure from the cabinet in 1991 that Tun Dr Mahathir Mohamad had three names in mind as the new finance minister -- Tan Sri Sanusi Junid, Tan Sri Rafidah Aziz and Datuk Seri Anwar Ibrahim. Was this indeed the case?
Answer: Rafidah was then the minister for trade, having been appointed to the post after the Team A versus Team B split in 1987. Sanusi was minister for agriculture.
Dr Mahathir wasn't too sure about Anwar. He said, "I don't think Anwar can handle the ministry of finance" given his academic background. He was a graduate in Malay studies.
My counter argument went along this line -- "I think if you want him to be your successor you have to groom him.
"I can help him and guide him, give advice."
In the end, I managed to convince Dr Mahathir.
Anwar used to come to my house very often to seek my advice on matters related to the ministry of finance.
He would also bring me to to his house for lunch very often. His aunt cooked my favourite dishes.

Read the rest of the Q&A HERE.

How many people will listen to Daim.A lot of UMNO membernare vary upset with him,beside Tun Mahathir in his book said a lot of people talk about Daim being a vary corruoted Finance Minister,That why he remove him.
Not once but twice.

He really worry if Anwar become PM,he have to move from bukit Melawatinto Sungai Buloh.

Syabas for the good interview, NST.
Awaiting your interview with Sanusi