Our Men Killed in Lahad Datu ... 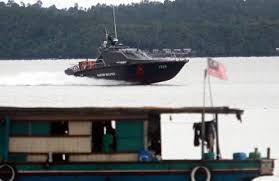 ...with more casualties among the Sulu gunmen.

PM Najib has confirmed that  two Malaysian commandoes were killed and another three injured in an exchange of gunfire which Home Minister Hishammuddin Hussein had earlier affirmed that our forces DID not start.

Also, it is confirmed that 12 Sulu gunmen who claimed to be of the Royal Sulu Army were killed.

The NST reports that as at 4.30pm, several Malaysian security forces have been taken to the Lahad Datu Hospital.

Curfew has been declared in Lahad Datu after gunfire broke out between our security forces and the gunmen who claim to be kin/kith/supporters/army of a man from Sulu who wants to be known as Sultan of Sulu Jamalul Kiram III.


Prayers for our fallen  forces and for those injured.

May peace be quickly restored.

WHERE IS THE PRIME MINISTER OF THIS COUNTRY?

Had it with idiots who politicized the entire event. Appreciated Wisma Putra's engagement with Aquino's government.

may the souls of the two brave policemen rest in peace for they have sacrifice their life for this beloved country..al-fatihah..

Let us remember the blood that these two policemen have bleed for protecting our land from the intrusion of Kiram terrorist..

This is cheap shot, quite frankly show how imbecile you really are.You want Najib to be on the spot? Why najib need to be in Lahad Datu?

Is not like Najib have tactical military training. What he really need to be concerned is diplomatic issues. They got phone/ internet to do that.

Maybe it is you should go there. No, not as frontline soldier\ just become waterboy for our security force, why not?

Would you like to go to Lahad Datu and give a helping hand?

ANOM 7.02pm. Don't be so moron about this. This is not a political issue but our beloved Malaysia security issue.

Yes indeed pkr and its goons are just stupid,wonder what we will be in for If they get voted in

But one thing very clear,our ministers made a very big blunder.They should have let the brasses of the armed forces do their job.Afterall that is what they are good at.The ministers should not let politics get in the way,putting our country's security and people at risk.

What is there to negotiate with armed rebels or militants who invaded our country.Except that they are Muslims and many illegally turned citizens of Sabah are their relatives.They compromised our country's security in return of trying to cozy votes from the Muslim Phillipino migrant community.

What will the international community think about the way our leaders handled the hostile situation.If armed Malaysians were to invade the Phillipines,Indonesia or Thailand they will be history already.

anon@7.02pm
you moron it was the PM who authorised the 'take all the necessary action'
you hate umno or the malays or the country?

Never mind the PM of Malaysia... where is the BRAIN of Anon 7:02PM? Good lord, these zombies are running around everywhere.

Weak leadership produced weak and disastrous results.Like it or not,we as a country and a people has to be the laughing stock of our neighbours and the whole world.

How are our leaders and military top brass going to look their counterparts straight in the eyes,when attending regional defence co-operation meetings with this blunder hanging over their heads.A real embarassment to our country's gomen and people.

where do you think he is? having a picnic with tomato, cheese and cucumber sandwiches? cant you see he is up on his feet all day long making sure, for us, there is peace, progress and prosperity? what are you? a retard who cannot read?

These Fellers entered the country illegally carrying firearms and with ill intent and now we are arguing about who started it?

We let a group of Filipino terrorists come invade our shores and set up house in our peaceful and sleepy state of Sabah.

When we have scorpenes costing billions of ringgit that cannot even swim,how are we going to protect our sovereignty from a bunch of no good,blood thirsty terrorists.And our ministers even offered these terrorists what is so famously called Malaysian hospitality.

Offered Malaysian hospitality to a bunch of international and blood thirsty terrorists.What the heck when even Malaysians are offered the stick of batons by charging FRU and PDRN personels.

Have our ministers lost their bolas when facing blood thirsty adversaries.What about protecting the sovereignty of our country and citizens,which they have sworned to do so,instead of worring about shedding bloodshed to these terrorists.The end results of these unforgivable blunders have cost the lives of our brave policemen and soldiers.

These bimbos have made Malaysia the laughing stock of the world of circus clowns.Must these people never learn that it is a big NO-NO to ever negotiate with terrorists.

There are rumours circulating around that the Sultan of Sulu will be sending his rebels in small groups into Sabah.He has also called on his followers already citizens in Sabah to come out in arms.These guys just love to fight.

It is time to call in Shuczanagger and his robots to help Hishamuddin resolve this matter,once and for all.

WHERE IS THE MINISTER OF DEFENCE OF THIS COUNTRY?

"...But one thing very clear,our ministers made a very big blunder.They should have let the brasses of the armed forces do their job.Afterall that is what they are good at.."

If you mean that the army rather than the police should do the job, consider this:-

VAT69 police are not your ordinary CID police. They are a specialist paramilitary police trained by the British Special Air Services special forces.

While the Pasukan Gerak Khas happens to come under the police for whatever historical reasons, they are de-facto soldiers, albeit lightly armed with at most light machine guns and mortars.

Also check out the Jungle Squad (Pasukan Polis Hutan/Police Field Force) & Pasukan Gerakan Am (General Operations Force) which traces its roots back to 1948.

Once again, they are paramilitary police and de-facto soldiers.

Please let me know if you're looking for a author for your site. You have some really good posts and I believe I would be a good asset. If you ever want to take some of the load off, I'd absolutely love to write some content
for your blog in exchange for a link back to mine.
Please send me an e-mail if interested. Many thanks!