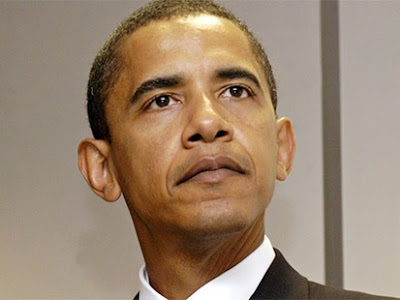 I sure hope so.
Won't you please close down Guantanamo Bay and release all the detainees who were unlawfully captured...

Will he make a difference - to the US, to the world, I wonder? We'll have to wait and see how this guy will turn out -- his oratorical skills, smooth style and good looks aside.

WASHINGTON (AP) – Barack Obama was elected the nation's first black president Tuesday night in a historic triumph that overcame racial barriers as old as America itself.

The son of a black father from Kenya and a white mother from Kansas, the Democratic senator from Illinois sealed his victory by defeating Republican Sen. John McCain in a string of wins in hard-fought battleground states — Ohio, Florida, Virginia and Iowa.

A huge crowd in Grant Park in Chicago erupted in jubilation at the news of Obama's victory. Some wept.

McCain called to concede defeat — and the end of his own 10-year quest for the White House.

Obama and his running mate, Sen. Joseph Biden of Delaware, will take their oaths of office as president and vice president on Jan. 20, 2009.

As the 44th president, Obama will move into the Oval Office as leader of a country that is almost certainly in recession, and fighting two long wars, one in Iraq, the other in Afghanistan.

The popular vote was close, but not the count in the Electoral College, where it mattered most.

Obama has said his first order of presidential business will be to tackle the economy. He has also pledged to withdraw most U.S. combat troops from Iraq within 16 months.

Fellow Democrats rode his coattails to larger majorities in both houses of Congress. They defeated incumbent Republicans and won open seats by turn.

Politicians are politicians. They will end up not doing what they promised to do during the campaigning trails.

But what inspired me to this US election this time around is the selection of Mr Barack Obama. He inspires people to believe in their dreams.

Oh how I wish Malaysia will one day be this mature in selecting their leaders ~ a leader who is judged by their merits, and their dreams for the people. Not because their race is the majority

The Americans have proven to their world on this glorious historical day that voting their future president goes beyond RACE.

For Malaysian. road sings, non-Malay appoiments....still a major prbl only god knows when we going to grow up...

The spirit of the people for Malaysians - Voice as one against whoever that will deny us!

this NEW us boss needs to be ISAed
in malaysia for his safety = his LIFE is under threat lah !!

agreed with what you said mam...but just remember how long from their independence that this could happen compared to our 51 years....

not any one race in Msia was oppressed the way the Black was in the US....

Congratulation Mr. president Obama on your historic victory. A great victory for democracy. Your victory is an inspiration to all ethinic minority groups all over the world. Your victory has broken the shakkels of RACE. May god bless you and the Americans.

there are certain quarters that question the authentic ethnicity of Obama.when we look to him as african american,some says that he's not "truly" african american since his dad is white and his mom is black.

but still Obama have the blood of his African descendants running through his vein.

The USA has now shown us that a non-white can become the President of the USA.

Why doesn't the PM, DPM, Magoo and the M'sian Govt lead the way by first abolishing the ISA, PPPA etc and close down Kamunting Prison before we ask for the closure of Gitmo? Or publicly state their opposition to racist and apartheid concepts such as Ketuanan Melayu?

If say, the Twin Towers were to be brought down by terrorists, would we maintain an elegant silence and do nothing? Can you guarantee that Gitmo will not be repeated at Kamunting?

I doubt it. We have already abused the ISA by arresting reporters 'for their own safety', politicians like Teresa Kok without probable cause and RPK for being a threat to BN and not national security.

Before we give advise freely to USA, let's put our house in order first!!

I hope to see a capable person as PM for Msia regardless of race or religion - is that possible?

Btw, what's your thought on Mdm Low appointment in PKNS?

The US Presidential election campaign has opened a new chapter for US imperialism. The overwhelming opposition to the policies of the Bush regime and the onset of a deep and serious recession has seen a mass demand for ‘change’. Massive enthusiasm and high expectations have been aroused, especially among young people and Afro-Americans in the Democratic candidate, Barak Obama. The enthusiasm and hopes of what his presidency will mean goes beyond the USA. In poll after poll in Europe, Latin America, Asia and Africa, Obama is by far the favoured candidate. While the outcome of the election to the Congress and scale of the Democrat majority, especially in the House of Representatives, will be important factors in determining what Obama actually does in some spheres of US intervention, one thing is clear: Obama is coming to power in an entirely different world situation than when Bush and the neo-cons took power in 2000. The question of US foreign policy in the post-Bush era is being posed sharply.

THE ‘US EMPIRE’ AFTER BUSH—> http://asocialistmalaysia.blogspot.com/2008/10/world-relation-us-empire-after-bush.html

Can Malaysia release all the ISA detainees who were unlawfully captured???

When can Malaysia have CHANGE????

Tahniah, Barak Husein Obama!
Like most people, I'm a sucker for youth and good looks, haha!
Jokes aside, here's to the ray of hope that change is possible.

Can't help but to agree with Zaitgha...

You must be a black and you must be dreaming that one day there will be a black prime minister of Malaysia. Let me assure you, there are many of you in this country. You are not special.

I can hardly wait for Kalimullah Maseerul Hassan and Brenden Pereira to be charged with espionage and put away for good.

Espionage is an offence punishable with life imprisonment.

Brenden, through his own admission briefs Lee Kuan Yew every month.

1st, to those who talk about him being half black, not black enough ... there's a term to describe people like that, it's called - racist.
2nd, I cried when I heard the news about Obama winning the elections. Not because I was so happy that Obama won, not because I hoped this would halt the warring in the Middle East, not because I think it would bring great hope to minorities all over the world, not because I think his cultural diversity would help bridge many issues with other countries, not because it would bring much needed change to world policies. I cried in self-pity - that I live in this country with so little hope for the minorities, a country that seem to be going backwards when the world is pushing forward.
I cried thinking about the future of my children in this country where change is feared and suppressed whereas people around the world welcome it with open arms. I didn't just cry. I sobbed.

It took America more than 200 years for an Afro American to become President...I guess the non-bumi will have to wait for more than another 100 years to see a non-bumi PM. What Pak Lah said was correct...Malaysia can expect a non-bumi PM in future. So to the non-bumi pls be patient 100 years is not a long time in history.Wait ok??

CAN WE DREAM OF NEW MALAYSIA? WE CAN IF WE, FIRST, EFFECT CHANGE WITHIN OURSELVES. BUT THERE ARE MANY HURDLES WHICH WE HAVE TO SURPASS. WE HAD GREAT HOPES ON PAKATAN RAKYAT BUT PAKATAN RAKYAT PARTIES ( PKR, DAP & PAS), MUST GET RID OF THEIR AFFINITY TO RACE AND RELIGION. TO BE REALLY MULTIRACIAL & MULTIRELIGIOUS, THEY MUST FIGHT FOR ALL MALAYSIANS, IRRESPECTIVE OF RACE AND RELIGION. PAS, ESPECIALLY, MUST RECRUIT DIRECT MEMBERSHIP AND NOT THROUGH PAS SUPPORTERS CLUB. ISLAM DOESN'T DIFFERENTIATE BETWEEN RACE AND RELIGION. ISLAM HAS GREATER RESPECT FOR OTHER RELIGIONS. YOUR RELIGION IS YOURS AND MY RELIGION IS MINE. ISN'T CORRECT? I HAVE GREATER RESPECT FOR TOK GURU NIK AZIZ AND I HOPE HE WILL PERSUADE PAS LEADERS TO CHANGE THE PARTY'S CONSTITUTION TO RECRUIT DIRECT MEMBERSHIP. DON'T CONFUSE PEOPLE AS THOUGH YOU HAVE AN HIDDEN AGENDA. YES, WE CAN CHANGE IF THINK AND ACT AS MALAYSIANS.

actually, I don't know enough about the PKNS GM appointment, other than the fact that she is Chinese.

thanks for the reply - one step at a time, enjoy RPK release this weekend :-)

This victory is more than just a victory for one man, it is a victory over human dignity.

My take on the Amerian electio:

Help someone to help others, at the same time give recognition to one who have been selflessly helping others.

i don't think it will be new america, watch http://www.backtoislam.com/what-muslims-can-expect-from-obama/