Sunday mornings are "naik Bukit Kiara" or aerobics in the park days for me and my friend, Mia.
Yesterday I told Mia that I would not be joining her for our routine Sunday morning work-out because I was going to walk in the city. It'd be a nice day for that.
I'd probably meet some people there too.
And, wouldn't that co-incide with the planned walk in celebration of the International Human Rights Day?
But, wasn't that cancelled by the organisers, the Malaysian Bar Council?
Until today, I cannot understand why the bar council decided to cancel the walk which was really for a very very very good cause.
(Council president) Ambiga attributed it to the controversy blahblahblah.
I personally think that is balderdash. You are lawyers, for heavens' sake! You defend people's rights all the time. 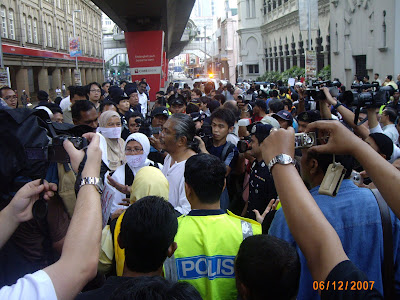 I know you cannot get a police permit. That has been long established. No brainer.
So, why? Pressure, pressure, pressure, huh? Ok. I get it.
You know -- this was not a march against anyone. This was a walk for human rights, that everyone, including the government should support.

I don't care if only 100 people would be gathered there. I was gonna walk that mile. It would be peaceful.

And waddya know? There were fewer than 100 people all ready to walk. But guess what? There were more, far, far more policemen and women on duty all the way from Sogo to the Bar Council.
There were more police cars than I thought necessary for such a peaceful assembly of not that many people. And there was a helicopter fiercely hovering above.
Someone said there were 500 policemen/women.
And so many journalists and photographers.

So, if I were a criminal or an opportunist, I'd go on a spree everytime there is a scheduled protest or rally.
I can be sure that all the police personnel will be at the rally "to keep the peace".

I have never ever felt so safe with so many policemen and women around. 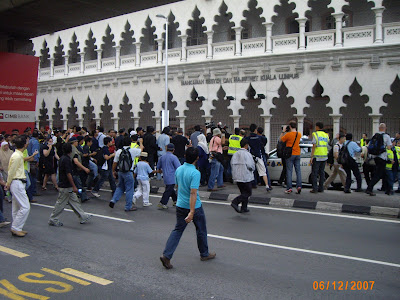 It was a peaceful march. Some representatives of a political party carried banners, but that was to be expected. I'd be surprised if they did not.
The marhers were told to disperse at least three times at different points.
Why they were told, beats me. No one was shouting. People were walking along the pavement. Everything was peaceful.
There was not much traffic anyway.
It was for HUMAN RIGHTS.
But, obviously the walkers did not seem to heed the warnings and continued their peaceful walk. The police did not fire tear gas or chemical-laced water.
But when they stopped at Jalan Tun Perak, there was a little bit of chaos when one or two people (including a woman) started speaking. And then there were raised voices.
I could not quite hear but the female speaker was pretty fiery. It went on for about 10 minutes.
Then a plainclothes policeman (in collared brown/white box-motif t-shirt) said to his colleagues: "Hey, mari, kita tangkap itu perempuan."
And they did. That was not necessary.

Eight people (including Parti Keadilan Rakyat's Sivarasa, Latifah Koyah and a lady known only as Norazah) were taken away.
My friend, Michelle, told me that the police roughed up the lady as they were taking her away.
Kesian dia, I said.
But I suppose that's what police do (the world over) when they take "protesters" away.

I think it was such a peaceful and incident-free rally that "tidak berbaloi" (not justified) if no arrests were made, given the strength of police presence there.
At the same time, those arrested knew what they were in for, given the circumstances. Still the arrests were unnecessary.
Frankly, I did not think that there was a need for any fiery or antagonistic speeches. We should have just walked on, peacefully to the bar council building.
Overall, though, it was peaceful.

One guy standing at Jalan Tun Perak was giving a "blast of a speech". People walked past him. I think someone from Keadilan persuaded him to move away from there.
And then, much later, he re-appeared near the bar council building, doing the same number.

We were sure the police would take him away.
We had no idea what he was saying but he was shouting and shouting. He seemed angry.
Sure enough, the police took him away -- I hope for teh tarik because he was really harmless. Just a bit of nuisance, maybe.

It was a good walk, though too leisurely for my liking because I'd get more sweaty and a better work-out going up the hill.
Well, it sure looked like our police men, women and officers much prefer to attend peaceful rallies.
Why, they were walking together with us... 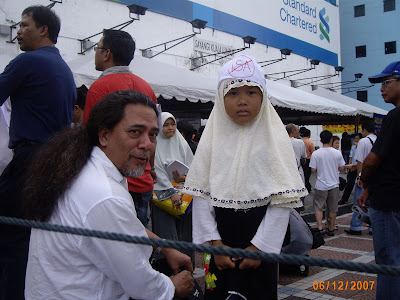 Here's a tribute to the International Human Rights Day although it is a really sad day for human rights!
May we never have to walk for our rights and freedom....

(At this point, there is no word about the fate of those arrested although lawyer and human rights activist Haris Ibrahim and several lawyers went to Bukit Aman to look into their case. Also Edmund Bon who is Rocky's lawyer has been arrested for allegedly preventing KL City Hall workers from taking down the banners at the bar council building.)
Posted by NURAINA A SAMAD at 11:47 AM

Was cheking wef bro Rocky in the morning and he told me kak made this entry.

Thanks for the update Kak.

What could be so law-breaking about a peaceful walk for human rights?

We talk, they don't listen. We send petition, they don't respond. We hold peaceful walks, they lock us up.

This coming 'erection' would be interesting.

this is a sad day for human rights in malaysia,if we have any...

if only they allocate 400 of these policement to look into nurin case, the chances of catching the deviant will be higher isnt it? anyway, so much for a freer society and democratic space from this regime. whats the next spin?

See how PM celebrates HR days?
See what PM meant by Democracy?
See why old Istana has to be replaced?
As renovation is difficult than building a new!
So new "Democracy" on its way!!

If Constitutions not straightened, no way!
If obligations, Penal Codes of authority not insisted, no way!
If EC and Judiciary cannot be straight up, no way!
If AG report cannot be acted upon, no way!
If voters mind not HR being smashed today, HR to come? no way!

Why Hindraf has to talk to the world at large
but not even in any room here that they had touched?
PM had laid the ground for Hindraf hard tasks!!

So many been deprived!!
So, many will be in one line!!
PM, you have thrashed so many asides
they have become a mountain by your side!!
Don't they catch you by the sight??

am I such an old mother hubbard that I can't explain to my teenage son about the walk ....plus the past demonstrations on the street .....why and was it necessary?

Peace ...peace to you and me and to all the malaysian people...find peace in your heart too.

Malaysia is what it is today because there were among our forefathers those who had fought to give us freedom, independence and liberties.

today, we live in a better place than before.
but some things are not right. and if they remain so, they will bring the ruination of the country. that is a fact.
this is nothing new.
wrongs are committed. and the people speak up against that.

not everyone has the gall, gumption..ok ok, the bravery (or foolhardiness, some may say) to make their voice heard. some of us prefer to continue our lives as though nothing is happening.

it is really up to you. and nobody can criticise you if you chose to remain silent.

we are all part of the country's political process.
what i am doing is nothing compared to some of the action taken by others to try and make a difference.

i walked for HUMAN RIGHTS...
whatever for, you may ask.
the fact that you asked, i am so sorry to say that even if i tell you, it will be very difficult for you to understand.
but one thing is clear, it is never about being a hero...because making a stand is never about that.

Peace of Mind!!
===============
Only comes when everyone knows what is Right or Wrong
so Rights of anyone will not be ignored!
Space of anyone will be respected and reserved!
An harmony in a society to be based.
All starts with Human Rights
Fairness and Equality among partners!

Rights partners with Obligations
Constitution with Policemen
Clients with lawyers
People with Government
Buyers with sellers
Consumers with Manufacturers, or Service Providers
House Buyers and Developers
Residents and Councilors
......so on!
No former, then, no latter!!

It starts on a lot of matters
Tax, Toll, Assessment, or Quit Rent
Everyone receiving has an obligation to be held!
Service with Transparency, Accountability and Credibility to tell!
with Rules and Regulations in line!

Power are provided to fulfill obligations and not to deprive other Rights!!

If you are wondering why ambiga called-off the lawyer's walk, you may not find it out in the next few days but you'll know in the near future. You know how it works.

Ambiga for CJ? Or chairmanship? Well, just a guess...

i agreed wholeheartedly that the government and the police should support the walk,even Supt. Che Hamzah reiterated the fact 'i have my human rights too' BUT the lady that was displaying a placard with the sentence 'PROTES RAKYAT' was deemed anti government.that is my solemn reason for the police AGGRESSION!!!!

Out of all that, I REALLY do agree you are and have never been a rude person.

The Kak Aina I knew when I was that young kid in the old Balai Berita, is still 'all her' even now.

I'm glad you are part of this relatively new community of bloggers as a 'faktor pendingin'. What we may never can get enough of are cool-headed dudes and dudettes.

Lets kiss, not hiss, for peace!

what i don't understand is why DBKL has to take down banners and posters that are INSIDE the Bar Building?

At second look, something wrong there!

Why only DBKL and not the Police to be charged?
Why talking only Trespassers and not other law breakers to the Bar?
Why not talking Human Rights for Peaceful walk from Sogo to the Bar?
Bar did not walk on Human Rights Festival!
Some brave members of Bar & People had walked the Festival!!
Don't you dare even to Voice the Bullies to the walk????
Are you shy?
Or have Human Rights been out of your sight?
Or the 5 are not members of yours?
who had uphold Justice without fear or Favour?

Lawyers, tell Bar what to do
A Bar for Lawyers and Justice to whom it concerns!!
Fight them in court
or a Institution of 13,000 members go burst!!
Or, to tell Malaysia or the world only Edmund and the 5 plus Hindraf Lawyers at work for Human Rights!!

And BAR is just a Victim of Banner Rights??