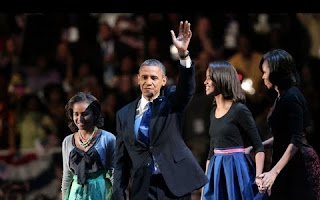 "Tonight, in this election, you, the American people, reminded us that while our road has been hard, while our journey has been long, we have picked ourselves up, we have fought our way back, and we know in our hearts that for the United States of America, the best is yet to come." - President Barack Obama - acceptance/victory speech, Nov 6, 2012.


He notched the decisive 270-vote threshold in the Electoral College with victory in swing state Ohio,  and a later in another swing state -- Virginia which gave him 303 electoral votes.

Undoubtedly, it was a very tight race. And as Obama said "a long campaign is now over".

It has been described as a grueling campaign  that set the stage for the Nov 6 showdown.

Obama's win over the electoral colleges was sizeable.

There was a broad range of interesting analyses of the outcome. One of the points made was that Romney won mostly the white vote and fared poorly among African Americans and minorities.

A study of the results also showed that he lost the youth vote by a huge margin.

One analyst said that had there been a high percentage of white voters in some of the states, Romney would have won.

One concluded that race factored signifcantly in the election.

Expectedly, some Republican leaders are now talking about "reinventing" the party, that they must now look at the "changing demographics"...in states that have a sizeable number of non-white ethnic groups such as Latinos, Asians and African Americans.


The elections over, both sides will be conducting a post-mortem. But more importantly, Obama has a gargantuan task before him --  fixing the economy at home and, foreign relations.

And facing a house divided (with Congress held by Republicans, and the Senate, Democrats.)

Nuraina,the US presidential elections was expected to be a tight race.But in the end it was not as tight as the experts predicted.

By 11.00 pm the two states,Ohio and Pennsyvania Mitt Romney must win was already in Obama's corner.It was an early night,like when Clinton beat Bush Sr.

Obamacare,Immigration and a woman's right to choose took care of Romney and his out of touch Republican party.

These out of touch conservatives forget that people who needed healthcare,abortion rights and children of illegal immigrants and their parents constitutes a huge portion of the majority of the population.

Healthcare for the working class and the poor.Abortion rights for women.Immigration rights mostly involved the Hispanics and other minorities.

The Republicans think that they can win with the votes of white males only.Very bad in simple arithmatics,for a man like Romney who was so successful in Bain Capital.

I'm so damn glad that Obama won. Otherwise the Romney fellow would be entertaining Israeli's wishes of bombing Iran's nuclear facilities. Israel has been pressuring Obama to do so but Obama refused - some even say relations between them have cooled considerably due to that.

And the Neocons, Jews and Zionists contacts of Anwar Al Juburi (pardon that, Ma'am - pangkat they say Mat Sabu beri) might have brought him to meet Romney and they'll further promote Zionist interests in this country and in the region.

What can Malaysia learn from the US Election which recently concluded with a win for Obama ?

1.Both parties were given equal mainstream medias coverage with unbias reporting.
2.Public debates by both candidates on topics of public interests (Economic, employments, education, foreign policies, etc) gave the voters an opportunity to assess the candidates’ capability to lead a country.
3.Mutual respects by both candidates.
4.Conceding speech by the losing candidate with best wishes to the winner.
5.Victory speech by the winning candidate with invitation to the loser to work together for a better future.

Can Malaysian General Election be the same ? Afterall, despite our different political views, we are all still Malaysians.