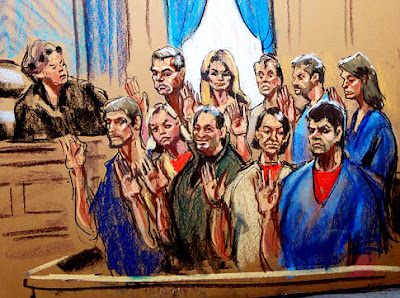 (Sketch of the 10 Russian Spies in court)

I'm sure most of you did not miss the reports of Russian spies in the good US of A.
The FBI got 'em!
I know some people out there are going to make a movie on this. (Yet) another spy thriller.
Brings us back to the Cold War. Some things don't change, I tell ya!
I mean, spies still need to work, eh?

I was fed on a pretty good diet of spy books when I was young. We still have all those books in their original cover back at Bapak's place.
Let's start with Ian Fleming's James Bond books. Classic, man!
Then there were Graham Greene and John Le Carre and much later, Robert Ludlum and Frederick Forsythe.

Until today, I enjoy a good spy thriller -- book or movie!

WASHINGTON – With the conclusion of the biggest spy swap since the Cold War, the U.S. has defused a thorny diplomatic problem quickly and cleanly — and avoided damaging recent efforts to improve relations with Russia. And Moscow has escaped further embarrassment over a group of spies that over the years apparently had little if any success in ferreting out any useful secrets.

The 10 sleeper agents, who blended into American communities before being arrested two weeks ago, were back on Russian soil Saturday, a day after they were exchanged on the tarmac of the Vienna airport for four prisoners the Russians had accused of spying for the West.

Two of the prisoners were flown to England and the other two landed aboard a chartered jetliner at Dulles International Airport outside Washington late Friday.

There as SPY (spies) in this age ? I think only ELECTONIC spies in this age.

Padan muka AMERICA !!
But we must remeber millions oaf AMERICAN, ZIONIS spies around the world.

To prevent this we shoulad implement DEATH PENALTY by shooting them.

Then there was that Cambridge gay spy ring of Philby, McLean, Burgess, Blunt, Caincross, Liddell and Hollis.

dpp
we are all of 1 race, the Human Race

In Malaysia you have spies too!! All those frogs that is jumping around parties!!!

I have read all of Ian Fleming's books, wonder who wrote the scrips for the new movies because they ain't Ian Fleming's.

I used to read Erle Stanley Gardner's Perry Mason too when I was younger and read many of W.E.Johns' Biggles and his World Wars adventures when I was much younger.

It's good to have reading habits but sad to say Malaysians don't seem to have pick up the habit.

Like in the West or places like Japan, how many Malaysians can you see reading on trains,planes and restaurants.Hardly any.

It would be interesting if someone made a movie about Malaysian spies working for the KGB.

The Malaysian govt caught about 80 in the past.

Although I don't know what information the Malaysian spies were giving to the soviet union. Super Mokhs training methods? Nasi lemak recipe secrets?


Laughter is the best medicine next to money.