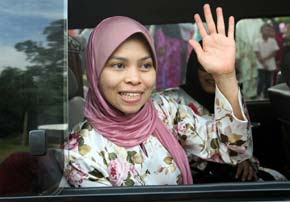 Kartika Sari Dewi Shukarno who was to be caned for drinking beer has been given a reprieve. At least during this month of Ramadan."The sentence remains. She will be caned after the fasting month. She has been released but only temporarily," said Pahang Religious Affairs committee chairman Mohd Sahfri Abdul Aziz.

(Picture of Kartika waving to her family as she was being taken in a van enroute to Kajang Prison.)

Mohd Sahfri said the decision to postpone the convicted part-time model's caning was made after the AG chambers advised that it should not be done during Ramadan.

The mother of two was arrested during a raid at the Legend Hotel Lounge in Cherating at about 11.40pm on July 20, last year, for breaching Syariah law which forbids Muslims from consuming alcohol.

Kartika, 32, was fined RM5,000 and sentenced to six strokes of the cane last month by a religious court. She paid the fine.

However, prison authorities said for Kartika to be caned, she should be jailed. An order was then made to have her detained.

Kartika refused to appeal against the sentence and said she was ready to be caned.

She said she wanted the sentence to be done publicly since it was meant to be a lesson to others.

Under Syariah law, caning or whipping is mild.

According to reports, religious department officers had gone to her parents' house in Sungai Siput to take her to the Kajang Women's Prison where she was to be detained.
She was to have served her sentence there.
Kartika was released before she could even be brought to the prison.

I know many people - across the religious divide -- have expressed outrage over her case.

Obviously, punishment for the offence under Syariah laws leaves so much grey area and loopholes. Just look at how it all went from the day Kartika was convicted.

Now, she is in limbo. She's ready to be caned but she's been told "not yet". The woman wants to get it over and done with, for crying out loud.

Frankly, she did not have to be caned, although it is provided for. Yet, she had to be jailed in order to serve the sentence (caning), something the Syariah judge had overlooked.

Makes me wonder whether the judge was overzealous when meting out the punishment.

Perhaps, Kartika should consider appealing against her sentence.

But, latest is that she and her father made separate reports at the Kuala Kangsar district police headquarters.

Kartika said her report was to safeguard herself as she had not evaded the warrant of arrest that was issued.

"There is no official black and white on my status. What is happening here? I am extremely sad as I have prepared myself to receive the punishment," she was quoted.

Shukarno lodged a report against the Pahang Religious Department for treating his daughter like a football and putting her in limbo.

Meanwhile, don't we have a reputation to protect?

This was how Talibanism started. I am a non-Muslim and I'm very worried about how this event has unfolded.

The good one or the bad?

"Does this mean that Muslim women are not the equal of their non-Muslim sisters under the law?"

I don't know about you, but I like the kind of religion that teaches us to be kind, honest, productive, thoughtful and considerate of others, and pretty much leaves it at that.

And when it comes to bad guys, I much prefer the defense "The devil made me do it" to "God made me do it." Stuff the devil makes you do is bad, sometimes real bad, but admitting that it's bad at least makes it honest.


Religion is a serious subject, but don't you wish some people took it a lot less seriously?

There's nothing in written in the syariah law's that mention whipping due to alcohol comsumption. Its interpreted by own on syariah autorities.

I think you are aware that Muslims from at the young and tender age has been ingrained that Arak/Khamar (and Pork) is forbidden.

So what could be the excuse? "I don't know that it is Haram?" or "I thought that Kuantan is like Sinkapoh"?

Reminds me of what the Prophet sais: Verily the Kafirs will never be happy until you adopt their ways!.

Muslims are so defensive. Look at the barbaric act of CIA to the Muslim detainees? Anyone care?

These religious officers are monitoring muslims in Malaysia on how they should behave. But who is monitoring these religious officers? You mean to say these same officers are ENTIRELY and INCAPABLE of committing sins, even though some may be done unknowingly?!!
On the point of consuming alchohol as against Islam, what about those Malays who love to consume tapai, that concoction of fermented glutinous rice that is wrapped in a banana leaf. I do not know the alcohol content in tapai but there is definitely alcohol in that food item. But just because it is a food item that many Malays, by default Muslims, love to eat then it is alright? What kind of interpretation of Islam and double standards are these religious officers having? There are so many grey areas where Muslims in Malaysia can or cannot be charged for contravening Islam's teachings that this is like a train running wildly off its tracks. And it is certainly making Malaysia a laughing stock to the rest of the world.

We should respect and uphold the law. The law is the law.

I am proud to get to know a lady like Kartika. She had done wrong and wants to repent and willing to submit to punishment.

She wasted no one's time, money or energy.

I wish her and her family well.

Did they think about Ramadan before they went to her house?

Or they picked her up....and then they realised "hey its Ramadan"

Is Malaysia like Iran? Or is it worse than Iran?

It is BARBARIC to administer capital punishment in order to make people toe the line.

Why don't the syariah court cane muslims who are caught & tried for robbing, stealing etc?

True we may argue that criminals are already serving a sentence but if we allow Kartika to be caned, why not also cane ALL muslim criminals for ALL crimes?

And why stop there?

From a family affair issue that turns into a society issue that in turns into a Muslim community issue that in turns into a World Wide issue being watch all over the world. ie. From an Islamic issue that turns to a world attention. Poor Kartika has been living in shame since 2007 for tarnishing the family's name in Malaysia as well as in Singapore. I wonder Najib knows if this has been prolonged and it seems that a petty issue is been mislook by the PM. I wonder from 2007 was there any appeal made by Kartika? I wonder if PM had made a research before his 'appeal' statement was made?

in the spirit or ramadhan and forgivenes, can i suggest to the religious authorities to put a quick and diplomatic end to this.

Repent - 'Oh Syariah court please punish me for I have sins, Pls cane me for I repent.' How certain are we that an offender has fully repent? To an alcoholic if the caning is just a symbol, I believe that it defeats the purpose. Just look at drug addicts, to be caned but yet the offence is done over and over again. Moreover, in Islam that is such a thing as 'Sembahyang Taubat' or Repent prayer whereby an offender feel disgrace in the eyes of Allah and he/she will perform it and not do it again. If Kartika had performed such prayers, can any mortal questioned her repentance? Or if only the caning is done will society believe that she had repented.

Deter - Why should caning for deter be done to symbolise it? To deter starts from society. 'Sale of tobacco under 18 is prohibited'. Is there a sign mentioning that 'Sale of alcohol to Muslim is prohibited'? Deterance is an act of community and is not a punishment.

Educate - The consuming of alcohol is prohibited when someone commits slander during the time of the prophet. The offender had cause a public nuisance and as such it has to be banned. The man was punish to educate the offender and the whole community. Yet again how is caning of Kartika symbolises caning to educate? She has been a Muslim for the past 32 years and has been educated by the Islamic society around her. Is Kartika knowledge on Islam really shallow? Is the society around her to be blamed? During the prophet time, Islam is at his peak and an offender is punish for drinking alcohol to educate is valid as perhaps he is new to Islam.

Teach - To teach a Muslim by caning is harsh be it a symbolic caning. How much can we teach? A child can be cane by the parents so as to teach him/her the right and wrong. What about an adult? Should an adult Muslim be caned if he ignores the Friday prayers?

SHould this whipping be done in public? So as to get the message to Islamic community? By not whipping we are all aware that Kartika's sins has tarnish her family's name all over Asia and now the world. She has given the message to all. Should society disgraced her further? Is that an Islamic faith? Is that what we want to reflect about Islam?

Reason behind the caning decision:-
Pleaded guilty as advised by Syariah Court, Hired Lawyer so as to lighten the sentence of not being caned but in vain. Was advised to appeal again after the sentence was made by the judge but was ask to disappeared and was verbally promise that warrant of arrest will not be issued by the Syariah court once appeal made. Is there such a ruling? Should Kartika trust this system? Should she appeal again after the sentence was handed down by the judge and to disappear as advised by the Lawyer? Will the court play Kartika out? In 2005 2 Muslim men had been appealing there sentence thru the lawyer in Kuantan Syariah court till now. When will this flip flop law be fully implemented? Is a fine of RM5000 justified and in accordance to Islam teachings? A 3 years of jail term is for those who could not afford the RM5000 fine and is this justified in Islamic Law? I wonder if a true Muslim will disappeared from court...Sigh. Unislamic indeed.