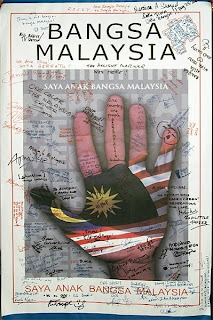 Three events took place yesterday (Saturday Aug 25) at 66 Lorong Setiabistari 1, Bukit Damansara -- a forum on Bangsa Malaysia initiated by lawyer-blogger Haris Ibrahim of "People's Parliament"; the official opening of Blog House, the headquarters of The National Alliance of Bloggers (All-Blogs); and a Merdeka get-together/dinner during which the Negaraku was sung and the Rukunegara was recited.

Speakers at the forum were former teacher blogger Zorro Unmasked (Bernard Khoo), lawyer-politician Zaid Ibrahim, Rocky, lawyer-blogger Malik Imtiaz and, university lecturer Azmi Sharom and Jayanath Appudurai.
At the event, Pelitar (Penyanyang Legasi dan Inspirasi Tunku Abdul Rahman), was formed.
Pelitar will carry the Bangsa Malaysia aspiration to other parts of the country.
Penang, Ipoh and Johor Bahru were named as the next venues for the Bangsa Malaysia awareness campaign. (Check out for the new blogsite on Pelitar.)

Some 100 people were at 66 Lorong Setiabistari 1 which, by the way, is the location of Blog House, the HQ of All-Blogs.
All-Blogs pro-tem president Ahirudin Attan (Rocky's Bru) officially opened it.
All-Blogs was formed in April to promote blogging and protect bloggers.

The forum started around 5pm. The evening event -- dinner and performances by bloggers, including pantun recital by blogger-turned-politician and All-Blogs pro-tem vice-president Jeff Ooi and Big Dog - ended past midnight.

Politician Tony Pua was there, as were bloggers Marina Mahathir, Nathaniel Tan, Shar101, Shanghai Stephen, What a Lulu, Rikey, A Voice, Pasquale, I am a Malaysian, Desiderata, the Stand-up Philosopher, Ancient Mariner, Sang Kelembai and SK Thew.
We were also in the company of two very young bloggers - Aishah, 11, and Aiman, 12.


What a day! What a night!
Some really great Malaysians there at the gathering. They may be saying very off-line things which really are things you and I are always talking about but which those up there do not want to hear.
One thing we all agree is that racial politics have always been an obstacle to achieving true racial unity where all Malaysians feel belonged in this beloved country of ours.

Hey, That poster looks super cool now with all the signatures and comments. It is like grafitti art poster that I would not mind hanging on a wall somewhere.'Tis art!

I do not know how large it is but any plans of printing poster-sized copies of it for sale.
I would imagine it will sell like hot cake, er, or hot mee rebus!

And maybe another one sans signatures and comments. This, for the buyer to have his own Bangsa Malaysia get-together and get his friends to sign and write comment.For his own personalized artwork.

Seems like a good fund-raiser of an idea and God knows All-blogs needs funds, a warchest of sorts,for legal suits and such minor irritants like that.

would look cool on a t-shirt. esp a baby t. posters too, of course. the all blogs will get pelitar to take up your suggestion. thanks man. er, you want to put your signature on it, too? we can wait. you know the blog house's address.

it was a damn good do. haris probably didnt expect it to be this good. i left a comment on his people's parliament, about he taking all of us somewhere. somewhere better than here, i should have added. the presence of bloggers (the who's who in socio-political blogosphere, i must say, minus a handful non-anons like raja petra, anwar ibrahim and lim kit siang, perhaps) and friends of bloggers was heartening. zaid ibrahim had balls to be there, taking out his political colleagues and defending them as well.

i like the part when the cops made their presence felt by driving up and down the street. at least the neighbours can now rest assured that crime rate in the area will drop significantly.

that's a great idea.
All-Blogs will take up yr suggestion.

i think we were quite expecting some police presence. They did not disappoint. they came...I thought Haris handled them well.

sorry about that, Jun. you're always with us...that's why.

How i wish i was there too ha ha ha...what a wish for a small foodie blogger like me ek?...anyway good to know that you all had a good time..

Nuraina, A great day indeed. Its history in the making. I had other plan that day, so was unable to be there. Anyhow my heart has always be with all those bloggers. Maybe it should be thought of as an annual even. Have a nice day and take care.

zai -- you know the address. as a blogger, you are welcome to Blog House.
we can have a makan and you can contribute your special dishes.
or we can have a fund-raising and you can sell your cookies and so on..

it was a good gathering, you may or may not agree with what was said, but that's ok....

great bunch of malaysians. and very loyal too!

what a pity you could not make it!
Any meeting or gathering that brings together a diverse group of people, is always meaningful.

There'll be more gatherings of this kind, Pak Idrus..
hope to see you at the next one!

Nuraina, a commenter "awakening" in Big Dog's blog crystallised the evening best:
On August 26, 2007 at 11:42 pm awakening Said:
I am moved to see all races coming together, standing up tall proclaiming that we are all ‘Bangsa Malaysia’. If this is the last train to get us there after having missed the station for the last 50 years, I am getting on board!

I am so glad and utmost pleased I attended the whole evening in pakaian kebangsaan, for All-Blogs to commemorate Hari Kebangsaan (Kemerdekaan) and for Rocky and Haris to allow and give me an opportunity to read national laureate Dato' Usman Awang's poem for the occasion called "Tanah Air (Menjelang Kemerdekaan)".

All demonstrated their patriotism, be it young & old, skinny & chubby, men & women, dogs & rabbits, God fearing & free thinkers, et al, in the true spirit of being Malaysian, as citizens of this Tanah Air.

Selamat Hari Kemerdekaan ke 50 to you, Nuraina, your family (esp your father0, All-Blogs and everyone who patronise this great blog.

God bless Malaysia and us all, InsyaAllah.

zorro,
how apt. The last train to where we all can be what we are as one nation!

we make up the country, and i am sure there are more of the kind of people I met at the gathering.

there is hope for the brave...

you looked resplendent in your baju melayu johor.
yes....diverse mix of people who care for this country and the future of this country.

Kak Ena,
Is the Blog House open everyday? Perhaps one of these days, I'll bring my family over tu berkenalan - after all the wifey and daughters are all bloggers too. Can?

Its not that I don't care. Something, as usual, came up.

at the moment, it is not opened everyday. sometimes, an exco member is around to supervise installing of this and that.

if we have an exco meeting, then, there will be people.

of course you, azian and your kids can come over. only thing kalau tak ada orang, the gate is closed.

zewt: i might have....though i don't remember any pastor introduced to me.

Great to read the Malaysian spirit is very much alive. One nation one people of diversity. Thank you to all who are willling to stand up and be counted as Malaysian.

Daily we are assaulted with a lot of craps from the govt.

If we are too comfortable, in other words remain apathy, danger awaits. Comfort that lulls us can turn lethal. It's the storm that keeps us awake that may save the day.

H&L: very much alive. we must never use politicians as the only indicator. when we meet so many great malaysians, our faith in humankind, is restored.

this is a great country. and we make this country.

hi fella malaysian nuraina:
and all Comm members (esp Tony Yew who did not have time to catch his breath and we did not exchange words beyong jest Hello!) worked very hard for a successful evening -- Terima kasih, Thank You U, Sieh sieh.

Howsy and I toured Blog House, gave it two thumbs up and we have secretly marked our space for 'squatting" over -- we are from the Ulu, you see...

Bangsa Malaysia -- the Way Forward, yes, above race, colour creed and gender. Oh, age too -- I am on the other end facing Aishah but we connect wellA!:):)

Sis Ena
The Bangsa Malaysia spirit is also well and alive here. Our youth has abundance of it, we just have to show them the way. Got a copy of A. Samad Ismail: Journalism & Politics, published in 1987. Am currently reading it for the first time. A fitting read for Merdeka. And the gorgeous photos – a feast for the eyes. In the family picture taken on raya day, 1983, are you the one standing first or second from the left? Azah is the one standing second from the right, right? Saya budak baru belajar, kalau salah tolong tunjukkan ya. Can’t figure out yang mana satu Kak Ton and Kak Olin. Lalin and Nina are the one sitting on the armchair, kan? One of the gorgeous ladies resembles Yunizar Hussein (who duet with M Nasir, and daughter of painter Hussein Anas).

Am planning to go to KL this weekend, and stay at our auntie’s house in SS3, Kelana Jaya. If you are not too busy, we can meet.
aMiR

hello and greetings to you too, fellow malaysian, desiderata!

We must make full use of the BlogHouse. Which means bloggers must regularly meet there, well..whenever we can..not all of us are unemployed and monkeying around.

it was so good to be there last week.

aaah.... yes, the photo.
i will caption the photo or you.

aMir... mindful that the photo was taken 24 years ago. I was not married then. Neither was Kamal. And of course, Lalin and Nina were so young then.
And several changes have taken place in our family and our lives since.


This weekend... great! Kelana Jaya is Kak Ton's neighbourhood and near mine.

do email me and I will email you my number: nursamad@gmail.com

Have just emailed you. Kamil looks and sounds familiar. He is also a movie buff, kan?
aMiR

aMiR: yes....he is. and he used to contribute film reviews to the NST.
Dia old boy (MCKK).

Yes, I know of him. A qualified accountant, used to work in PD. Together with Tengku Mahaleel (old boy of SIC), they were the heart throbs ...
aMiR

i was supposed to go but i was out of town for a company outing. was surprised as my pastor told me he is going.

i am sure you would have been introduced to him... he is getting quite vocal nowadays. which is good.

plus that poster is real 'arty-farty'!

zewt: aah... would've been great if you were able to make it.
but now you know where the bloghouse is. you can cruise around the neighbourhood
and have a looksee.

hope you can make it the next time we have a function/event.

Hey, I am checking this blog using the phone and this appears to be kind of odd. Thought you'd wish to know. This is a great write-up nevertheless, did not mess that up.