The Murder of George Floyd 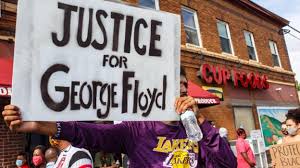 A petition is out for justice for 46 year-old African Amercian, George Floyd, not just for Americans to sign but for global citizens too.

Here is his story. (The incident in Minneapolis, was also on video taken by a bystander who pleaded with the policeman to release Floyd from his knee choke.)


On Monday (May 25 2020), police officers responded to a call from a store about a bad cheque signed by Floyd. According to another report, Floyd had used a counterfeit $20 at the store. At any rate, the alleged offence did not warrant the brutal treatment against Floyd who was unarmed,.

He was arrested and handcuffed and then pinned down to the ground by one of the officers.

The officer was using his knee to pin down Floyd who died at the hospital late that day.

Bystanders were witness to the incident. The one who took the video could be heard repeatedly urging the officer to get off  Floyd who seemed to have deteriorated and then gone motionless.
On the video, the white police officer, was clearly seen kneeling for several minutes on Floyd who moaned: "I can't breathe."
Floyd's death has sparked outrage and protests across the country,.

The four officers involved in Floyd's death were fired from the department the following day, Minneapolis police said.
The officers involved in the incident were identified by Minneapolis police as: Derek Chauvin, Thomas Lane, Tou Thao and J. Alexander Kueng, according to the police website.
The incident is being investigated by local, state and federal authorities.
All four officers involved in the death have invoked their Fifth Amendment right against self incrimination, Freeman told CNN following the press conference.
"I am absolutely sorry for the pain, devastation and trauma Mr. Floyd's death has left on his family, his loved ones," Minneapolis Police Chief Medaria Arradondo told ia news conference.
Posted by NURAINA A SAMAD at 1:06 PM