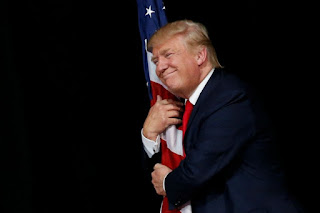 With all due respect I am more worried and concerned about corruption in Malaysia let alone the 2.6 billion that went into the VVIP personal account.

Trump is doing less than the various Jabatan Agama in Malaysia. He is not trying to foist his religious beliefs on Muslims...he just wants a breathing space of 3 months to decide who can get into his country and who cannot. Non-Muslims born in Malaysia, living there since birth, wait for up to 30 years for a decision on citizenship applications. Muslims foreigners appear to wait for a much shorter period. That's the experience of Malaysian born applicants. Did any Muslim support their rights or complain about that? At least in USA, non-Muslims are supporting the rights of Muslims against trump. Clearly there is a lesson there for Malaysian!